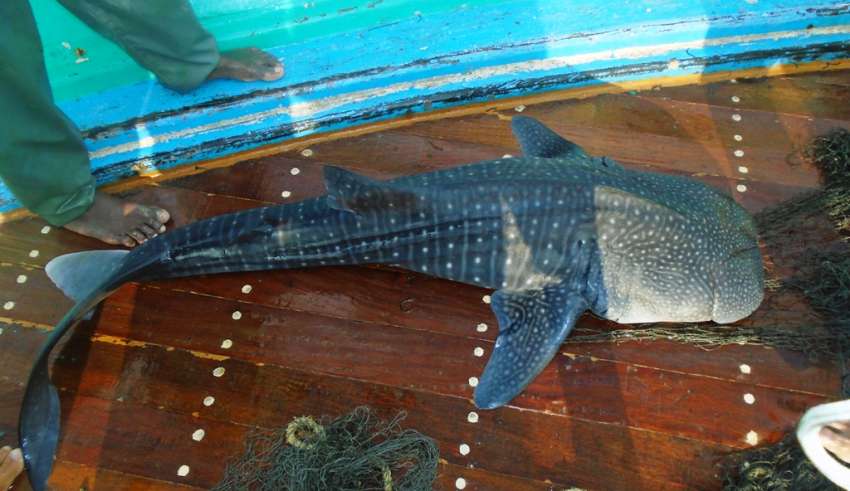 CHURNA ISLAND: WWF-Pakistan trained fisherman captain Ali Akbar along with his crew safely released a 7.5 feet juvenile whale shark caught in the gillnet on 17 August. The fishermen were carrying a fishing operation about 2 kilometres north of Churna Island, Balochistan. This is not the first time that a whale shark was rescued by fishermen, however, their pups seldom survive during the entanglement or die even in the rescue process. According to Ali Akbar, the baby whale shark was entangled in the net placed for catching tuna in the waters. He informed that the crew members first tried to disentangle it inside waters but the animal did not show any body movement, hence, it was heaved on board. As it was freed from the net, the baby started to move slightly. Considering that the animal may still survive, captain immediately instructed the crew to safely release it back to waters. To the utter surprise and jubilation of the fishermen, the juvenile whale shark came to life and encircled the boat possibly thanking the fishermen before disappearing in the deep sea.

Since, start of the Observer Programme of WWF-Pakistan in October 2012, a total of 61 cases of whale sharks have been documented. According to Muhammad Moazzam Khan, Technical Advisor (Marine Fisheries), WWF-Pakistan, a healthy population of whale sharks is reported from Pakistan coast. He shared that fishing season for tuna which started from 1 August 2017, brought forth a good news of safe release of Indo-Pacific finless porpoise earlier this month whereas rescue of juvenile whale shark is another feather in the cap. He informed that there used to be aimed fisheries for whale sharks since ages whose first documented record was published by Buist in 1850, however, this fisheries died down in 1970’s. Some fishermen, used to kill whale sharks for liver oil if they get entangled in their fishing gears. ‘Awareness and training programme initiated by WWF-Pakistan five year back has resulted in protection of this species and now hardly any whale shark dies due to entanglement in the fishing gears’, he added.

Whale shark is considered as endangered according to International Union for Conservation of Nature (IUCN) Red list whereas it is included in Appendix-II of the Convention on International Trade in Endangered Species of Wild Fauna and Flora (CITES) and has been proposed to be included in Appendix-I of the Convention on the Conservation of Migratory Species of Wild Animals (CMS). It is also covered under other international instruments including Indian Ocean Tuna Commission (IOTC) of which Pakistan is a member. According to Khan the population of whale shark in Pakistani waters seems to be stable, however, it is extremely prone to frequent entanglement in fishing gears, habitat degradation and marine pollution.  Churna Island which is being considered to be declared as a marine protected area (MPA) by Government of Balochistan is an important basking, feeding and breeding area for this species. Two neonate whale sharks reported from Balochistan coast in 2008 confirm the breeding of whale shark in the area.

While, Rab Nawaz, Senior Director Programmes at WWF-Pakistan lauded the role Sindh and Balochistan Fisheries Departments who proactively legislated for protection of whale sharks in 2016. He said that this established a basis for taking action against the fishermen who deliberately catch whale shark or try to market it. He also informed that earlier in 2012 and 2013 when two whale sharks were deliberately killed by fishermen, the incidences received extensive media coverage that developed the interest of other fishermen to target this species. However, now with legislation in place the whale shark fishing is stopped altogether in both provinces. Rab also pointed out that since 2012 fishermen have safely released a large number of endangered, threatened and protected (ETP) species which includes 61 whale sharks, 45 mobulids, 25 sunfish, 6 dolphins, 5 whales, 25 sea snakes, 5 masked boobies (seabirds) and thousands of marine turtles. ‘On occasion of International Whale Shark Day which is observed on 30 August, the release of a juvenile whale shark in Pakistani waters will send a good message to the world’, he added. PR