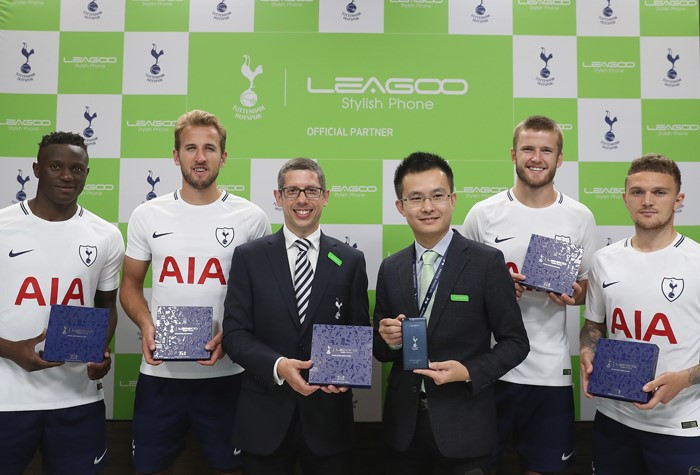 Football is a game highly challenging in power, skill, and team work, and it always brings audiences excitement and surprise. Tottenham Hotspur Football Club is the rising star club won the 2nd place in 2016/2017 EPL matches. According to footballdatabase.com on Aug 17th, Tottenham Hotspur Football Club ranks No.6 by points in all world football clubs considering all scores, standing and statistics.

As the exclusive Global Mobile Phone Partner of Tottenham Hotspur F.C., LEAGOO will sponsor the club for consecutively five years. The rights LEAGOO enjoys from these millions pounds contract including the field advertising boards in the home matches the club engages. LEAGOO will appear nearly everywhere Tottenham Hotspur goes. LEAGOO is already in the official website and Facebook of Spurs.

Through the cooperation of the two teams, LEAGOO will be under tremendous exposure to global football lovers. And Spurs will get the attention of the whole mobile industry as well as over tens of millions mobile phone users across the globe.

In the announcement event, LEAGOO introduces an exclusive edition of its new flagship mobile phone T5 for Spurs. T5 features the navy blue of Spurs logo color on the full metal body and dual rear Camera to shoot the moment, the software also is tailor made to match Spurs. After about one month, Spurs fans will get this version of the device.

It takes LEAGOO International 3 years to build the brand in global mobile phone market, from APAC to EMEA, and from CIS to EU. From now on, in the following 5 years, LEAGOO will take the root in consumers’ mind with the spirit of football, together with cutting edge technology to bring more magic to the fans.

This announcement clearly expresses LEAGOO’s ambition and dedication to be an influential communication brand in the world mobile phone marketplace. PRNewswire/Asiaet Pakistan