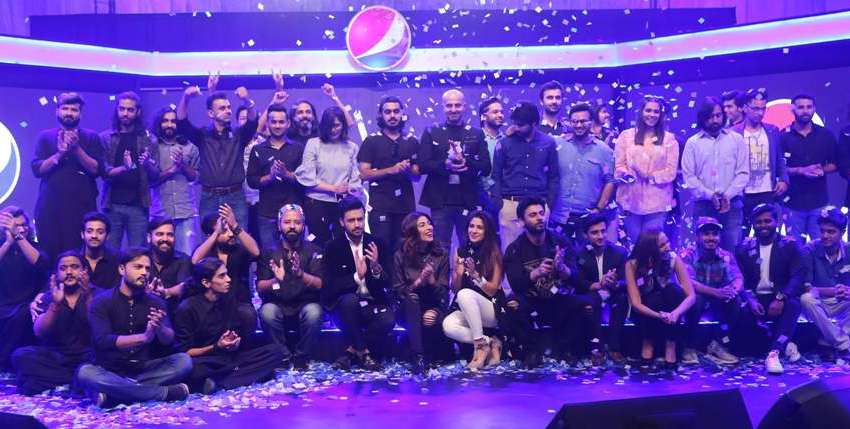 KARACHI: Pepsi is proud to launch Battle of the Bands again, after a 15 year hiatus. Fawad Khan, Meesha Shafi, Shahi Hassan, Farooq Ahmed and Atif Aslam were confirmed as the official judges for Pepsi’s eponymous musical reality show. The five powerhouses appeared together at a press conference held by Pepsi Pakistan at the Pearl Continental Hotel in Karachi.

This comes after the release of Pepsi Battle of the Bands launch song, a mashup rendition of Alamgir’s‘ Dekha Na Tha’ and ‘Do Pal Ka Jeevan’ by Vital Signs.

Fans, the world over, are elated to see Fawad Khan returning to his musical roots, a feat he has been preparing for since the past 6 months – where he is joined by, Meesha Shafi, Atif Aslam, Farooq Ahmed and Shahi Hasan to preside over the newest wave of emerging talent in Pakistan, with Ayesha Omar acting as the host of Battle of the Bands.

Fawad started off his career as a contestant of Battle of the Bands back in 2002 with his band EP, so the franchise has come back full circle with a semi-finalist band member returning at the peak of his career to be part of the judging panel, and Shahi Hasan, an integral member of the country’s most famous pop group, Vital Signs, is back to mentor new talent in Pakistan.

Farooq Ahmed, from Aaroh, winners of the first Battle of the Band returns as a guest judge for the audition episodes. He has been lending his musical ability and status as the returning champion of the franchise to help bring forward a new age of band culture to the nation.

Hundreds of audition videos poured in from all over the country and 36 bands made the cut for the audition rounds; they will be a part of musical history in the making, a forum renowned for establishing creating original music in Pakistan. Pepsi had held auditions for Battle of the Bands earlier on in the year and the top bands are being mentored to be part of the biggest musical show in Pakistan.

The season consists of 8 episodes which will include the celebrity judges, Fawad, Meesha and Farooq for the auditions, and then the addition of Atif Aslam and Shahi Hasan for the battle rounds. Two power-packed episodes have already been launched which have been received phenomenally well by the media and music fans alike. In this press event, the Top 8 bands were also announced who are now going into the Main Rounds of the program. These talented Top 8 bands are from different music genres and their names are: Kashmir, Darvesh, Roots, Badnaam, Aura, Madlock, Shajr and Jasim & The Pindi Boys.

The Marketing Director of Pepsi Pakistan, Mr. Salman Butt said “Pepsi has always taken great pride in showcasing musical talent in Pakistan and Pepsi Battle of the Bands is our chance to do it all over again!”

The bands are the true stars of the show, and Battle of the Bands will highlight their Journeys from underground rock groups till they become household names!Special focus will also be aimed at the importance of the grooming and styling that goes into becoming a great music band.

Not only is Pepsi’s Battle of the Bands a turning point in Pakistan’s music industry; it is a convergence of some of the most brilliant minds in entertainment. With the Grammy nominated, Faisal Rafi directing and leading music production, along with his incredible music team, Pepsi Battle of the Bands is truly a force to be reckoned with. Saad bin Mujeeb from Green Chillies Production is the video producer of the show.

Several high end fashion designers and celebrity stylists have been taken on board by Pepsi to dress and style the judges and the bands.

Pepsi has specially flown in UK based director, Andrew Bramley particularly known for being the video director of the band Coldplay for 9 years. He is joined by DOP, Nick Collier, renowned for his work on shows like the X Factor and the Olympics games, and Jack Linnekar who is the lighting programmer.

International Advertising Limited, Saatchi and Saatchi are the executive producer of the Battle of the Bands, while Proximity Advertising is handling digital content. Catalyst Public Relations is providing PR, Image Consultancy and Celebrity Management services.

The show airs every Sunday evening on all major TV Channels. Every episode is also available on Pepsi Pakistan’s website: www.pepsibattleofthebands.com.