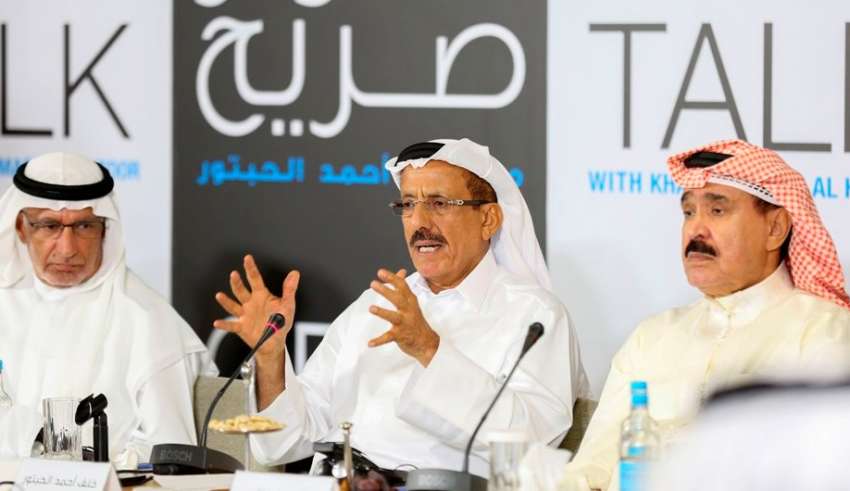 Al Habtoor, a vocal speaker and influential writer on the Middle East, spoke candidly to an audience of more than 100 attendees and over 5,000 online viewers from across the world. He was joined by a group of prominent political experts from across the region, including Dr Abdulkhaleq Abdullah, Professor of Political Science; Dr Abdullah Al Mutawa, Director of Al Arabiya News – Dubai; Ahmad Al Jarallah, Kuwaiti journalist and the Editor-in-chief of the Arab Times and Al-Seyassah newspapers; Dr Fahd Al Shelaimi, Chairman of the Gulf Forum for Peace and Security; Faisal Jalal Abbas, Editor-in-chief of Arab News Newspaper; Khaled Abou Baker, Egyptian lawyer.The live session was moderated by Yusef Al Muammari from Abu Dhabi’s Al Dafra TV and Noura Badawi, Chief Communications Officer, Al Habtoor Group.

Al Habtoor stated that the Qatari regime’s loyalty towards its GCC allies has long been questioned. He said, “We commend our leaders for their patience with Qatar for more than twenty years, and are waiting for its leaders to get back on the right track. We cannot compromise with terrorism, it is a plague, we cannot allow anyone to support it. If you support terrorism, you get punished, you are either our friend or foe. We have to be clear, we are against terrorism and we hope that Qatar comes around to its Khaleeji home.”

He further reinforced his confidence in the UAE economy. “During the war between Iran and Iraq, and the invasion of Kuwait, the UAE economy was always stable and prosperous. We thank God that our economy is moving forward.The occupancy in our hotels is always high with guests from Asia, Europe and across the world. We are not harmed by the Qatari boycott, we are just sad to see the embargo affecting Qatari people.”

Al Habtoor highlighted that the UAE leaders have taken a wise and patient stance in relation to the Muslim Brotherhood. “The UAE is a unique society, a society built on tribes. We are unified with our leaders. Let us set aside diplomacy and political talk, the law must apply, otherwise this crisis will never be resolved. My interest is the safety of UAE, Saudi Arabia, Bahrain, Egypt and the whole world against terrorism.”

Khaled Abou Baker, renown Egyptian lawyer said, “The UAE leaders, the late Sheikh Zayed bin Sultan Al Nahyan and Sheikh Rashid Bin Saeed Al Maktoum are in the hearts of each and every Egyptian. Egypt is the country that suffered the most from Qatar. We have shed our own blood because of them. Mothers have lost their sons and this has all been supported by Qatari funds…Is this the Arab spirit, an Arab killing another Arab? A Muslim killing another Muslim?”

The panellist pinpointed to the Qatari-funded broadcaster, Al Jazeera for targeting the rulers of Kingdom of Saudi Arabia and the government of Egypt with false news.

Tarek al Zarouni, author of the book ‘Alone in Al Jazeera’ and former Al Jazeera reporter, who joined the session via teleconference commented, “Al Jazeera is Qatar’s Trojan horse, the main supporter of terrorism, shaming Islam by making Yusuf al-Qaradawi the Mufti of the country. Until now, al-Qaradawi has a weekly presence on the news channel and he has the foreign ministry’s support. He is a symbol of terrorism. We need a strong media apparatus to broadcast true facts, a soft power to fight against Al Jazeera English. One hand of the beast has been cut but the other is still in motion.”

Al Habtoor, author of the publication, ‘Is Anybody Listening? How world leaders ignored prescient warnings on the Middle East’ said, “We don’t need foreign powers meddling in our affairs. However, we should remain in good relations with America.I hope that in the Arab world, especially Egypt, Jordan, the our GCC allies establish media offices in the United States to spread the truth about the Arab world and its leaders.”