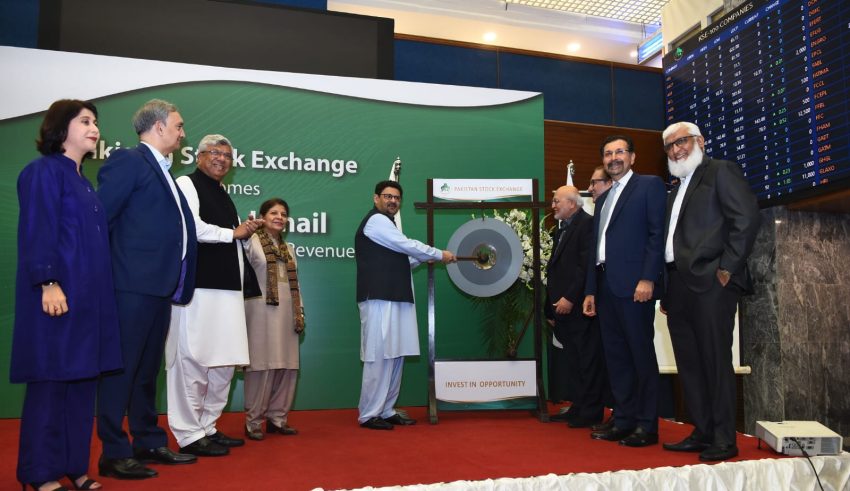 Welcoming the Federal Minister for Finance & Revenue, the MD PSX, Mr. Farrukh Khan, stated, “We are privileged to have the honourable Minister among us today and we welcome his presence at PSX wholeheartedly”. He further stated, “It is imperative for the growth of Pakistan’s economy to create a conducive environment which will help to attract more companies and investors to the capital markets. A broad based capital market helps to achieve important economic and social objectives, including improved savings and investment rates, documentation of the economy, increasing the number of tax payers and reducing wealth inequality. Hence, developing the capital markets is fully aligned with the government’s stated objectives.”

Mr. Khan added, “Capital markets don’t ask for any concessions or subsidies; we only want a level playing field compared to other asset classes and the large informal sector. Please give that to us, along with consistent tax and economic policies. On behalf of all the capital market stakeholders present here, I can commit that, with your support, we will grow PSX to its rightful place as a leading regional market, playing its due role in Pakistan’s economic growth.”

The Chairperson PSX, Dr. Shamshad Akhtar, thanked the Federal Finance Minister for his visit and apprised him of the recent developments at PSX while informing him of some of the concerns of PSX for the betterment of the capital markets & the economy. The Chairperson PSX stated, “PSX has formulated a new strategy which will be launched this year. Some key actions will be taken that will pave the way to augment both the supply side through mobilizing equity and debt listings and issuances as well as the supply side by increasing outreach to investors. A significant aspect is strengthening the governance of not only the Exchange itself but also that of the listed companies.”

Dr. Shamshad Akhtar added, “PSX is a mature exchange and it has offered unbeatable returns. PSX is not only transforming but also has a good governance structure along with a robust regulatory framework. The most recent accomplishment is the Onsite Joint Inspection that has been put in place which will ease the burden on the brokerage community.”

At the occasion, the Chairman SECP, Mr. Aamir Khan, expressed that well-functioning capital markets can immensely contribute to the wellness of overall economy, corporate sector and investors and for improving savings & investment rates.

Speaking about the macro-economic situation prevailing in the country, the Minister stated, “As an economist, I look at the fundamentals. From a macro-economic perspective, we have to keep our economy solvent and protect it from default. A few days back, the Rupee started appreciating against the US Dollar. This occurred

because we reduced imports, thereby decreasing our foreign exchange outflow. Even though this is not the best case scenario in terms of growth, it is far superior to the boom and bust cycles of the past. I personally do not believe in import substitution model and I am in favour of export expansion. This is where we plan to focus our efforts and we will take this forward for sustained economic growth.”

Dr. Miftah Ismail added, “Our tax to GDP percentage is very low at 9.2 percent. We have to do better in order to achieve economic stability but we will undertake reforms in a gradual and orderly fashion in this regard. The immediate steps that we took such as ending fuel subsidies and increasing direct taxes are bearing fruits and have saved our country from default.”

The event concluded with a closed door meeting which included the Federal Minister along with the top management of PSX, SECP, and key stakeholders. In the meeting, matters impacting the capital markets, business, the current economic scenario and challenges thereof were discussed.