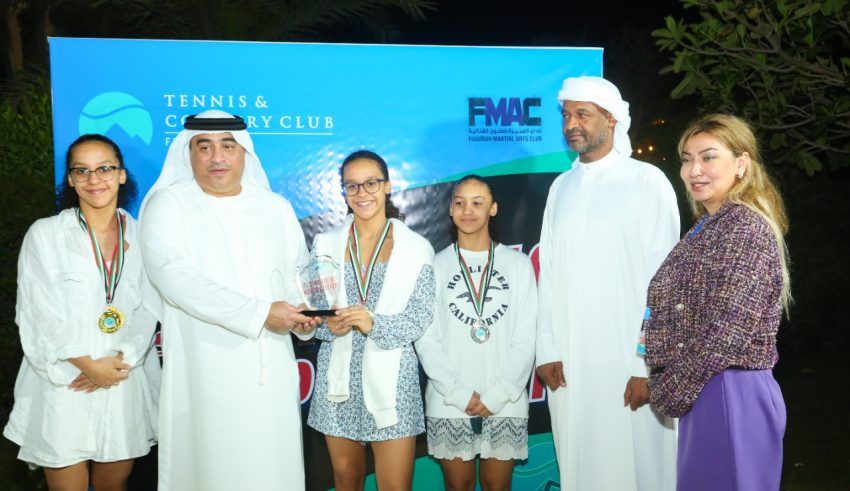 The second edition of the Swimming Championship concluded on Sunday with several swimmers and high divers displaying their very best aquatic talent in an incredible one-day sporting competition held at the iconic Tennis and Country Club Fujairah (TCCF).

The TCCF Swimming Championship was held under the patronage of Sheikh Abdullah Bin Hamad Bin Saif Al Sharqi, President of the Asian and UAE Bodybuilding Federations.

Buoyed by the success of the inaugural event, the Tennis and Country Club Fujairah again joined hands with Fujairah Martial Arts Club to host the top-class championship, attracting swimmers from across the UAE.

A number of promising and budding swimmers competed in the different categories, including freestyle, backstroke, breaststroke, butterfly, and relay, which was open for women’s and men’s.

Saif Khaled Eisa dominated the butterfly event for adults as he clocked 28.05 to grab the top spot on the podium.
Saeed Yahya finished second in 29.1, while Mustafa Rafee settled for third with a time of 29.45.

Eisa said: “I am delighted to have won a gold medal at the competition. This performance will give me extra motivation for future events.

Sharief Habib Al Awadhi, Director General of the Fujairah Free Zone, was the chief guest on the occasion. He gave away the trophies to the winners in the presence of Sultan Al Samahi, President of the UAE Swimming Federation, Abdul Ghafour Behrozian, Chairman of the TCCF, Hania Reggi, Senior marketing and Sales Manager,

Behrozian said: We were ecstatic to host the swimming championship, which was another step forward in the TCCF’s mission to build a more ambitious, active, and healthier community.

“The second edition of the championship has seen incredible success, and this event has established a strong platform for all swimming enthusiasts across the Emirates.

“The event provided an opportunity for the players to shine, besides promoting new talents,” Ghafoor added.

Reggi said: The success of the swimming event at TCCF will boost the organization’s distinctive ambitions of promoting sports and enhancing its status as a global entertainment, sports, and leisure destination.

“We also want to express our gratitude to Hamilton Aquatics for hosting a para-swimming final, which allowed more of our DiSE competitors to compete at a bigger stage.”