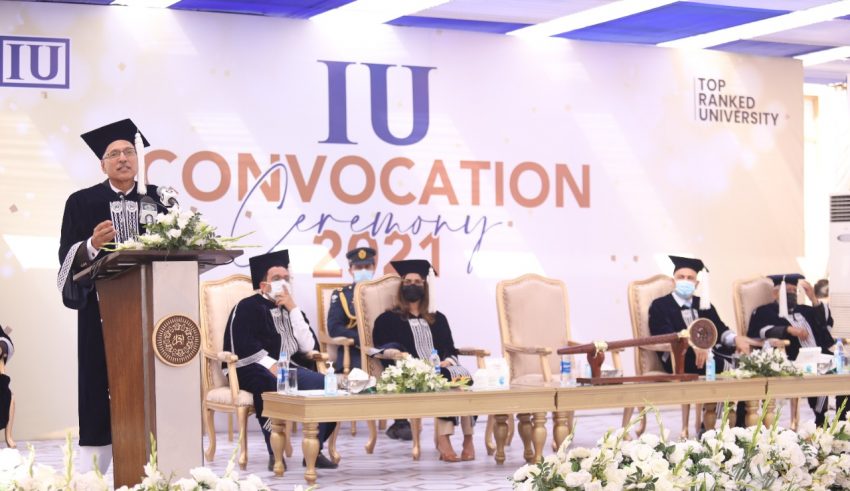 The President of Pakistan, Dr Arif Alvi, has called on Pakistani Universities to produce more graduates. He spoke at the convocation of Iqra University (IU), where he was the guest speaker. He cited the growth of artificial intelligence and cloud computing as a factor that can drive more significant graduate numbers.

“Sixty-four per cent of our population is under the age of thirty. The world is changing. The people who are educated today are among those who will mark their presence in the world. By the year 2030, eighty million graduates will be needed. Knowledge is not necessary being imparted in the classrooms but is now available in the cloud for all professions,” the President said.

The President praised Iqra University as an outstanding and pioneering educational institution for its approach to blended learning. He congratulated the graduating students and their parents for investing in education. However, he stated that the world was moving fast, and those policy decision-makers needed to catch up and not think and plan in a linear progression.

“I was educated as a dentist in a bricks-and-mortar institution, but 80% of dentistry knowledge has virtual possibilities. Iqra University, with this virtual approach, you can increase your numbers. Our country needs to increase its number of graduates. We need millions of graduates. I appreciate what you are doing.”

Dr Wasim Qazi, the Vice-Chancellor of Iqra University, started the convocation with an engaging welcome address, reminding the audience about some achievements Iqra University has delivered.

“This year, we mark the 21st anniversary of Iqra. Now, that makes us relatively young compared to Oxford, Harvard, or the Muslim world’s older universities, such as Al-Azhar. But consider all that we have achieved in that short time. None is greater than the fact that today we have graduated more than 31,000 students. What’s more, we have graduated more than 13,000 women. Let that sink in. We have educated 30,000 leaders. Transformed 30,000 lives,” said Dr Wasim Qazi.

In the past two decades, Iqra University has achieved significant milestones. It has been ranked the number one business university in Pakistan by the Higher Education Commission. It has also been included in the QS and Times Higher Education ranking of global universities.

“According to the International and independent rankings agency, QS, we ranked in the top 250 universities in Asia in terms of academic reputation, employer reputation, student-teacher ratio, studio-PhD ration and PhD citation ratio. Furthermore, after the pandemic, we were the first university to invest millions of dollars in acquiring a seamless learning management system, Blackboard.’ said Dr Wasim Qazi.

The Vice-Chancellor also highlighted Iqra’s co-curricular and sports activities, citing the University achievement in winning over 364 medals, of which 227 were by female students. He also pointed out that Iqra had looked after the interests of underprivileged students, granting merit scholarships and Qarz-e-Hasna to 36% of its students, amounting to 120 million rupees, during the last two years.