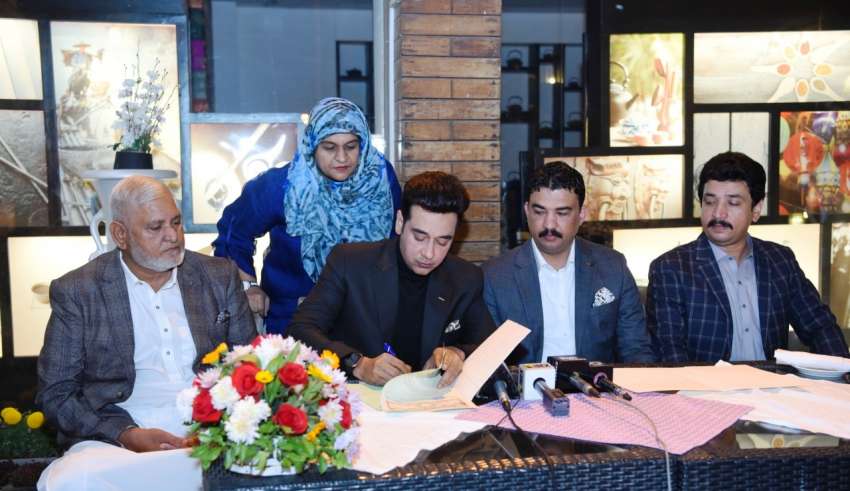 A very simple yet impressive signing ceremony of Memorandum of Understanding (MoU) was signed between the two parties. Mr. Nasir Khawaja CEO of The Gold Builders & Developers signed on behalf of his organizations, whereas Faysal Qureshi signed on his behalf. This signing ceremony was held at Tai Pan Restaurant’s garden located inside Pearl Continental Hotel, Karachi with all relevant standard operating procedures (SOP)s being adopted to.

Signing ceremony started off with recitation of Holy Quran by Mr. Muhammad Mavia, who also is a partner at The Gold Builder & Developers.

During his welcome speech, Mr. Muhammad Mavia said; “I would like to welcome all the guests and members of media for coming out in numbers at this event. We feel honoured to be here at this signing ceremony, where we are Pakistan’s top star/actor Faysal Quraishi is amongst us to be a part of our campaign”.

He further said; “this is an excellent initiative by Prime Minister Imran Khan and should be availed by everyone”.  He further said; “a lot of investment is coming into this sector and with focus on quality & commitment, customers will come to you”.

He concluded by saying that; “a lot of positive measures are being taken but still prices of raw materials like steel, cement etc should be revised to make this sector more viable.”

Renowned Pakistani actor, producer & television host Faysal Quraishi said; “it’s a great feeling to be a part of this project and I am very excited about this project, but on the other hand it’s a responsibility too”.

On replying to a question asked, renowned Pakistan actor said; “2020 was very disruptive, not just for me but for the whole world. A lot of my projects had been halted including my film of which 50% of the work is already done”. He added; “now 2020 has gone past us and we can expect 2021 to be a better. I see a lot of projects being kicked off and finally we can proceed in a positive manner”.

One question why they chose Faysal Quraishi, Mr. Nasir Khawaja CEO of The Gold Builders & Developers said; “we chose Faysal Quraishi because he is a very famous and well known actor, producer & television host. In much simpler words he is the most sought after Pakistani celebrity”.

Replying on a question about future projects, CEO of The Gold Builders & Developers said; “currently we are located in the capital city of Islamabad and but in future we plan to venture into Karachi and Lahore also”.

Dubai Chamber of Commerce, one of the three chambers operating under Dubai Chambers, toget…