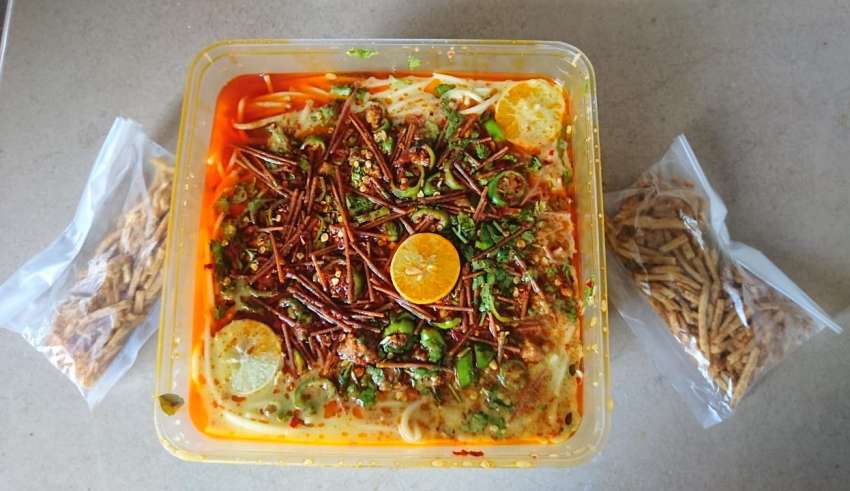 A very dear friend recommended Motiwala’s Cuisine, which is a home-based eatery run by Alishba Motiwala and Tahira Motiwala. They specialized in deliveries all in most part of Karachi and when we contacted one of the owner and enquired about their best savory offerings she said; “during evenings Khausey (khow-suey) is highly recommended”.  For a normal Karachiite like me, I had no idea what Khausey was, but the way she explained about Khausey felt tempting enough to try. She further said single portion can easily serve two to three persons.

So after consulting with couple of friends (boths memons), they loved the idea of ordering Khausey and so we ended up ordering Khausey. Delivery was suppose to take some time and I decided to make some positive us of that time by searching for Khausey on Google. Khausey is a Burmese dish, which have been adopted by the Memon community of Pakistan.

First look at it felt very tempting. Upon further inspection it revealed that it was a four layer savory sent our way by Motiwala’s Cuisine. First layer consisted on munchies and snacks. Some lemons were placed very artistic articulately on top. Second layer consisted of noodles prepared without much spices. Third layer had minced beef (qeema) which was had a spicy flavor to it and final layer had ‘karrri’, which is a special curry made with the help of yogurt and some local spices.

Overall experience of trying ‘Memoni Khausey’ was a delightful one. Almost every munch was different from the previous one and was tempting all the way. It was very hearty, was very delicious and the best part was this it was very light on our stomachs.

Alishba Motiwala and Tahira Motiwala at Motiwala’s Cuisine did make sure that they delivered exactly as they had promised, nothing less. High recommended.