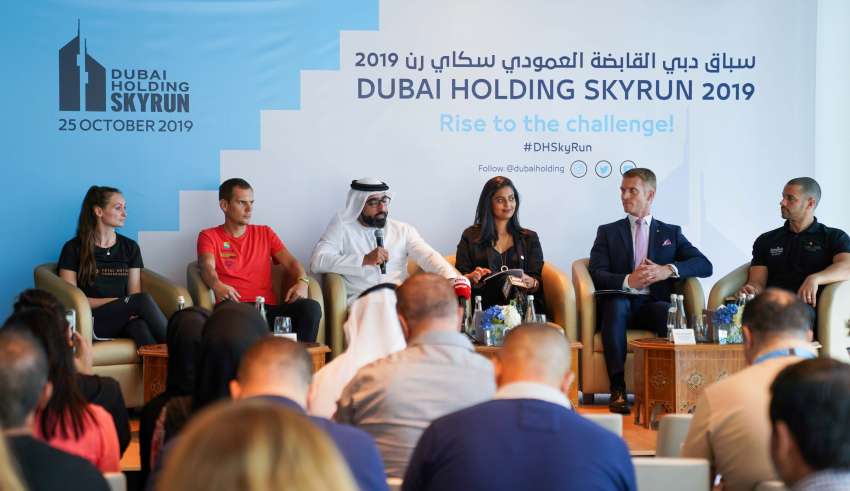 DUBAI: Dubai Holding announced that the Dubai Holding SkyRun 2019 is set to witness record participation, with more than 450 registered runners so far while registration is still ongoing. These runners represent 43 nationalities; and include an unprecedented over 100 female participants and 18 international elite runners, according to current data. This year’s edition will have 27 teams competing, the highest number in the race’s history.

With the numbers going strong, the return of Dubai’s official vertical race is set to become a major highlight of the ongoing Dubai Fitness Challenge, the campaign marking the city’s most anticipated month of fitness. The 16th edition of the charitable race will be held on October 25th, 2019, at Jumeirah Emirates Towers (JET), in partnership with Dubai Sports Council (DSC), International SkyRunning Federation, Vertical World Circuit, Jumeirah Group and Talise Fitness. Registration is open until midnight, 24th October.

The session was well attended by members of media, with the lively panel discussion and Q&A forming an engaging platform where all the pertinent details of preparation were reviewed at length. The speakers confirmed that all the partners and organisers are fully prepared and are looking forward to hosting the highly anticipated fitness event, emphasising that safety and security of runners is the utmost priority. It was revealed that in addition to the run, there were will be several activations within the race village, an on-site medical and emergency team, and a special breakfast catered by Jumeirah Hospitality for all participants.

Amongst other interesting facts discussed, the speakers highlighted that the oldest runner confirmed to date is 77 years old and the youngest is 16 years old. To ensure runner safety, the race will be organised in batches, similar to previous editions. The first race up the 52 floors comprising 1,334 steps or 265 metres of the iconic Jumeirah Emirates Towers, will start at 7:00 am on this coming Friday, followed by the second batch of runners at 8:00 am.

Khalid Al Awar, Director of Sports Events, Dubai Sports Council, said: “Dubai Holding SkyRun is a fantastic event that brings together people of different ages and backgrounds, and a strong platform for spreading the message of fitness and physical activity within not just the UAE but also across the region. We are delighted to be partnering with Dubai Holding once again; together we are able to achieve an even greater impact within our community.”

He continued, saying: “Our chairman, His Highness Sheikh Hamdan Bin Mohammed Bin Rashid Al Maktoum, Crown Prince of Dubai, wants to see Dubai become the most physically active place on the planet, the healthiest and happiest. That goal is the inspiration behind the 30×30 Dubai Fitness Challenge, which His Highness personally launched three years ago. And we are really pleased that Dubai Holding SkyRun is a part of the Fitness Challenge this year, as one of the very first races on the campaign’s busy calendar and the only official vertical race.”

Through Dubai Holding’s partnership with the International SkyRunning Federation, the 2019 edition run ranks as the world’s 5th highest skyscraper race and the only official vertical race in the Middle East. As part of the Vertical World Circuit, Dubai Holding SkyRun puts Dubai on the map, sharing the stage with the prestigious vertical runs in some of the world’s most popular cities such as New York, London, Paris, Milan, Seoul, Beijing, Shanghai, Osaka and Hong Kong.

Marino Giacometti, President of International SkyRunning Federation, commented: “We are pleased to be bringing the vertical world circuit back to Dubai and looking forward to working with Dubai Holding and Jumeirah Group this year and into the future.”

Giacometti added: “As we saw some very strong performances in Shanghai last Sunday, we are excited to see if new records will be set at the Dubai Holding SkyRun just five days later.”

Speaking on the panel, Piotr Lobodzinski, Champion of Vertical World Circuit, said: “I am very happy to come back to Dubai for racing in Dubai Holding SkyRun. It will be my 3rd time running up in Jumeriah Emirates Towers, after 2016 and 2017 when I set present course record of 7:09. My shape is good so I hope to run sub 7-min barrier.”

Fellow panelist Sarah Frost, International Elite Runner of Vertical World Circuit, said: “I’m looking forward to be racing in Dubai for the first time. I’ve heard a lot of great things about the Dubai Holding SkyRun from all the other elite runners who participated in the previous editions. This VWC race will be another exciting opportunity for testing my limits with new competition at an amazing venue.”

Continuing with her remarks, she said: “2019 is my first year of participating in the Vertical World Circuit, and I’m gaining more experience of international races to improve my ranking in 2020.”

Suzy Walsham, Champion of Vertical World Circuit (VWC), who has just won the Shanghai race on Sunday, 20 October, said she is excited to be back in Dubai, adding that: “I’ve always really enjoyed the Dubai Holding SkyRun, so it’s great to have it back on the circuit this year. Although the race is only 5 days after Shanghai, I’ll hopefully have sharpened up and be ready to go again. I’m still chasing maximum points so this race will be important for my overall VWC score.”

Marcus Sutton, General Manager of Jumeirah Emirates Towers, commented: “We are honoured to continue to host the Dubai Holding SkyRun since its inception, as this forms an important part of the nationwide initiative – the Dubai Fitness Challenge.  Jumeirah Emirates Towers has been the home of the competition, which is Dubai’s only official vertical race, for the past editions.  It has been a privilege to witness the individual success stories at each race over the years. We have seen first-hand the determination of the participants, challenging themselves as well as the victory and celebration in the eyes of each winner.”

Hammed Sahraoui, General Manager of Talise Fitness, said: “On behalf of Talise Fitness and Spa, we very proud of taking a significant part in the previous editions of Dubai Holding SkyRun, in terms of handling operations on-site, introducing the warming up sessions, providing guidance and training to the runners and even participating under the “team” category for the official vertical race. Safety is an utmost priority for us, we have extensive measures in place to ensure the race runs smoothly. On the race day, there will also be security personnel to patrol and oversee the event.”

Dubai Holding is granting awards for the top three male and female runners and the top team and is also giving out a number of prizes worth over AED 15,000. the first-place male and first-place female winners will gain a three-month membership at Talise Fitness in Jumeirah Emirates Towers Hotel.

Additionally, the J Club at Jumeirah Beach Hotel will be offering the winner a total of five day passes at its newly opened premium lifestyle and wellness fitness club. Jumeirah is also offering special rates at Jumeirah Emirates Towers Hotel for all Dubai Holding SkyRun participants, including 15% discount at Talise Spa, and 20% discount at Alta Badia and The Rib Room.