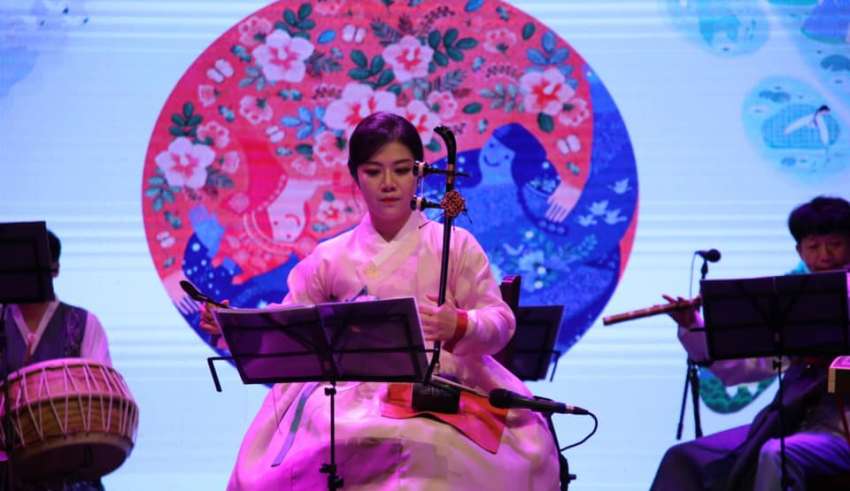 Event started precisely on time at 08:00 pm with senior staff member of Embassy of Republic of Korea, Karachi Office taking the centre stage and welcomed the Korean troupe to forefront of the stage. Before the Korean troupe’s performance, Consul General of Karachi Office, Embassy of the Republic of Korea, His Excellency Mr. Park Bong-Su was invited for welcome remarks.

His Excellency Mr. Park Bong-Su in his welcome speech welcomed guests / attendees present at this extravagant event and said; “culture is very importance aspect of our lives and here in Pakistan very few people about Korean traditional culture. We are bringing this orchestral troupe to create awareness about Korean traditional culture. I am very hopeful that people present here today will enjoy this performance and their eyes will open up to traditional Korean culture”.

Next up was Mr. Lee Tae-Geun, Director General of Jeolabuk-do Provincial Institute for Korean Traditional Performing Arts, who gave a short intro about the institute, performers and traditional Korean culture. He hoped that everyone present would enjoy this mesmerizing performance.

Mr. Ahmed Shah, President Arts Council of Pakistan of Karachi said; “we thank Embassy of Republic of Korea, Karachi Office for arranging this troupe from Jeolabuk-do Provincial Institute for Korean Traditional Performing Arts which will help us in understanding Korean culture. We also have good trade relations with Korea and we hope that our cultural relations improve. At this moment we are trying our best to preserve our own Pakistan traditional instruments and traditional music. Currently we have top 22 top musicians of Pakistan teaching at our music facility music in Arts Council of Pakistan, Karachi. All of them are teaching here free of cost. We would like to seek collaboration between the two countries in the field of music and dance”.

Next up was Korean traditional chamber music titled “Sin-Beannori” which is traditional Korean orchestra music, an arranged piece of ‘Beannori’ with a modern touch. The performance is the combination of improvisation and dynamic rhythm of east and west percussion.

Fusion of Korean traditional music and Korean chamber music was next. “beautiful world (saseol-nanbongga), you and I both dear (neoyeong nayeong) and neo-love song (chungsanbyeolgok Sin-Sarangga) was sung by Ko Seongjo and Park Hyunyoung. This performance was of Korean folk music but in a modern style.

“Pannoreum” was another performance of Korean traditional chamber music. ‘Pan’ has many meanings and generally the word ‘Pan’ means harmony and homogeneity but it also has the meaning of festival.