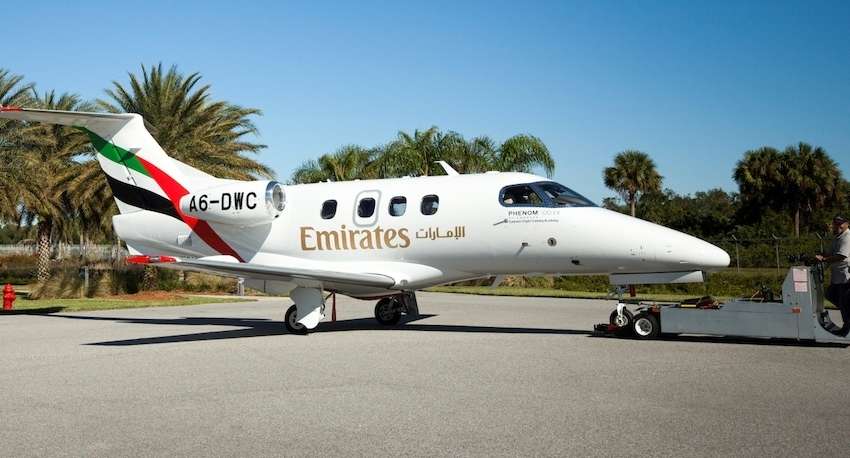 DUBAI: The Emirates Flight Training Academy, a launch customer for the new Phenom aircraft, has taken delivery of its first Embraer Phenom 100EV entry-level jet in Dubai. The aircraft, A6-DWC, is the first of the five Phenom 100EVs that will make up the training fleet of the Academy.

The aircraft was assembled at Embraer’s production facility in Melbourne, Florida, USA. Over the last few months, several teams from Embraer worked on the final stages of aircraft production including assembly, testing and painting. A6-DWC is the eighth Phenom 100EV aircraft manufactured by Embraer.

The Academy’s first Embraer Phenom 100EV landed in Dubai following an eight-day journey across more than 16,000 kilometres and 11 countries. The aircraft was ferried by two Embraer pilots to Dubai in a 16-sector route via airports in the United States, Canada, Greenland, Iceland, Scotland, Germany, Hungary, Greece, Egypt, Saudi Arabia, and United Arab Emirates.

The Emirates Flight Training Academy placed an order for five Phenom 100E business jets at the 2015 Dubai Air Show as it was considered to be the ideal entry-level jet for jet pilot training. However, in July 2016, the Academy upgraded its order to the new Phenom 100EV aircraft, becoming one of its launch customers and the first in the world to use the Phenom 100EV as a training platform for cadets.

The Phenom 100EV is an evolution of the Phenom 100E aircraft, which is one of the most popular entry-level jets in the aviation industry with over 350 jets operating in close to 40 countries. The Phenom 100EV features state-of-the-art avionics and the industry’s first ever touchscreen glass flight deck designed for light turbine aircraft, providing graphical flight planning training for cadets. The aircraft’s cockpit philosophy prioritizing human factors and its integrated on-board maintenance computer offer cadets the highest level of preparation for airline flight operations. The Phenom 100EV will allow cadets to benefit from airline-grade technology and performance during their training. Powered by Pratt & Whitney Canada PW617F1-E engines, with 1,730 pounds of thrust, the aircraft has a four-occupant range of 1,178 nautical miles (2,182 km).

In addition to the five Embraer Phenom 100EV aircraft, the Emirates Flight Training Academy has placed an order for 22 Cirrus SR22 G6 single-engine piston aircraft out of which six aircraft have already been delivered.

The Emirates Flight Training Academy, located near Dubai World Central (DWC) airport in Dubai South, is designed to be one of the most advanced flight training facilities in the world. Scheduled to be officially inaugurated during the 2017 Dubai Airshow, the facility will be spread over an area the size of 200 football fields and will include ground school classrooms, ground based simulators, a young and modern training aircraft fleet, a 1,800 sq. m dedicated runway, an independent air traffic control tower and a maintenance centre in addition to accommodation and recreational facilities for cadets. More information on the Academy is available at www.emiratesflighttrainingacademy.com. News Desk