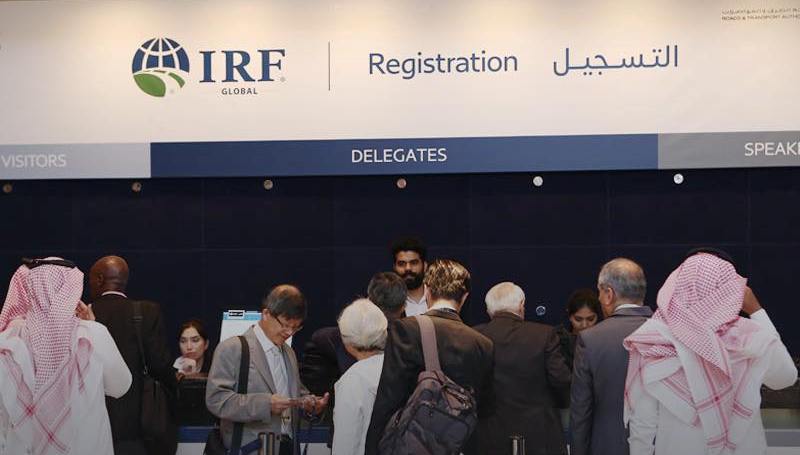 DUBAI: The First International Road Federation Congress and Exhibition, of the Middle East and North Africa (MENA), which started on Sunday, October 29, and will continue for three days until Tuesday, October 31, 2017 witnessed diversified participations from different countries all over the world.

The Exhibition brought together flagship companies from the UAE and MENA region, in addition to other businesses from Europe, the United States, Australia, Canada, China, India, Japan, and South Korea among other countries specialized in advanced road, infrastructure, mass transit and smart services. The Exhibition also attracted international IT think tanks; especially those specialized in road management & maintenance, public transport means and asset management.

Among the companies participating in the exhibition is AECOM, an American company with branches in various countries including the United Arab Emirates. The company works with the RTA in asset management, including Building Information Modeling.

Mohammed Al Qutaishat, Project BIM Coordinator, was absolutely thrilled with the participation in the accompanying exhibition, as the RTA is organizing the event for the first time in the region.

Mateusz Krakoesky, from the Scots company of InfraUAV, said: “The company is specialized in aerial photography and offers services related to architecture, as well as engineering & construction works including construction of roads, streets, tunnels, bridges and infrastructure works in general.”

“The company produces different types of self-propelled aircrafts used in a variety of infrastructure fields,” said Krakoesky, adding that their company works with the RTA in technical fields related to Intelligence Traffic Systems.

Location Solutions, a Dubai-based company showcased its products related to the RTA’s services. Samar Kal, Yousef, Marketing Manager at the company said: “Our services include vehicle tracking devices, in-motion truck weights & dimensions remote measuring devices, as well as the INVIPO system which compiles data from several sources related to roads and traffic in Dubai and loads it in a single platform. This concise and compact data helps the RTA’s concerned parties to take the appropriate decisions in this regard.”

The self-driving smart bus, introduced by Digi Robonics, was the focus of attention of the visitors of the exhibition accompanying the MENA International Road Federation Congress, which kick-started yesterday under the theme ‘Mobility Solutions for the 21st Century’, at the Dubai World Trade Center. The smart bus, one of the best projects worldwide, saw huge turnout as it poses a mid the exhibition in the vicinity of the RTA’s pavilion, which gives a good account of the RTA.

Bilal Al Hattab, CEO of the Digi Robonics, said: “This national company, which has manufactured the first driverless bus in the world, aims to compete with major international companies. We are specialized in innovation, using state-of-the-art technology worldwide.”

“Our strategic objective, added Al Hattab, is to Emiratize modern technology, and disseminate this culture among community members. Apart from ours services on offer, we live up to our societal responsibility in terms of diffusing, using and upgrading the concepts of innovation and modern technology.”

Hasan Amer Yasin, Head of AECOM’s pavilion at the Exhibition, expressed the delight of the company’s officials with this participation, saying that the company considers the RTA one of its key partners. AECOM, one of the companies operating in Route 2020, adopts the most sophisticated technologies, and constantly strives to develop its working mechanisms to keep pace with the continuous development seen by this sector.”

“We are one of the first to use aircraft to support our business thanks to our distinction in utilizing modern technology to design construction, besides using three, four, five, six, and seven-dimensional techniques, which are connected to other values invisible to the naked eye such as time, quality, etc.,” concluded Hassan Amer. News Desk