May 20, 2022 | 6:38 AM UTC
Home Business & Finance LATAM Airlines Group shows strong support for Qatar Airways and the State of Qatar 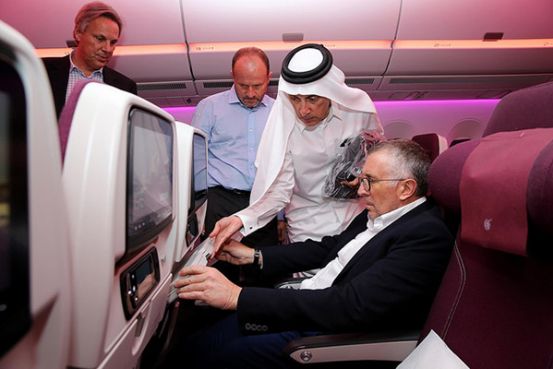 DOHA: Latin America’s leading airline showed strong support for Qatar this week when Qatar Airways hosted the LATAM Airlines Group Board of Directors for its first-ever meeting in Doha.

The board members, including Chairman of the Board Ignacio Cueto and Chief Executive Officer Enrique Cueto, arrived at Doha’s state-of-the-art Hamad International Airport (HIA), after flying on Qatar Airways flights from São Paulo, Brazil, and Madrid, Spain, allowing them to experience the airline’s renowned world-class service for themselves. While in Doha they were given an extensive tour of Qatar Airways’ hi-tech operational centre and technical facilities, as well as one of the airline’s Airbus A350 aircraft.

Qatar Airways Group Chief Executive, His Excellency Mr. Akbar Al Baker said: “We were delighted to extend the warmest of welcomes to LATAM’s board members and offer them a taste of authentic Arabian hospitality. “LATAM’s presence here in Qatar sends an important signal that it is business as usual both for Qatar Airways and the State of Qatar, and that we continue to strengthen our links with our valued partners around the world. Qatar Airways has a very strong partnership with LATAM. “We look forward to growing and expanding our presence in South America when we launch a brand new direct service between Doha, Rio de Janeiro, Brazil and Santiago, Chile starting in early 2018.”

During their two-day visit to Qatar, LATAM’s Board of Directors were able to see first-hand Qatar Airways’ new operational base and facilities thanks to a personally-guided tour from H.E. Mr. Akbar Al Baker. As well as touring the airline’s Airbus A350-900, they also visited the airline’s cargo operations and technical hangar, where an aircraft was undergoing an inspection by engineers, the Integrated Operations Centre, where every Qatar Airways flight around the world is managed, and world-class Hamad International Airport, complete with its modern and convenient airport hotel, luxurious First Class and Business Class lounges and Duty Free shops and luxury boutiques.

In December 2016, Qatar Airways made a strategic investment by acquiring 10 per cent of LATAM Airlines Group. June 2017 marked the seven-year anniversary of Qatar Airways’ operations to São Paulo, Brazil, and Buenos Aires, Argentina, as the award-winning airline continues to strengthen its presence in the region. Qatar Airways’ new service to Rio de Janeiro, Brazil, with the flight going on to Santiago, Chile, will be operated by an Airbus A350-900, offering four flights a week between South America and Doha. Qatar Airways Cargo has also expanded its reach in South America, with its commencement of freighter services to São Paulo, Brazil, Buenos Aires, Argentina, and Quito, Ecuador earlier this year. With the coming launch of cargo services to Rio, the new freighters aim to meet the growing demand for import and export trade in the region.

Celebrating 20 years of Going Places Together, Qatar Airways is one of the fastest-growing airlines operating one of the youngest fleets in the world, with 200 aircraft flying to more than 150 key business and leisure destinations across six continents. The airline has added Sohar, the Sultanate of Oman to its global network, soon to be followed by Prague, Czech Republic and Kyiv, Ukraine.