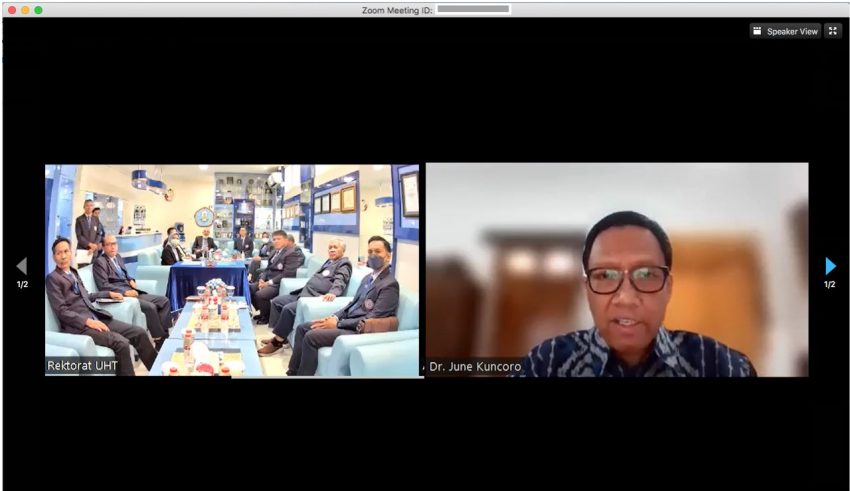 In his virtual remarks in Karachi, the Indonesian Consul General congratulated the two universities and hoped that the MoU could be followed up with concrete implementation programs for 2023, such as joint research, inviting each other to seminars and mutual visits to Pakistan and Indonesia. The two universities have in common the development of the maritime scientific field considering that both are also under the auspices of the Navy of the two countries. The Indonesian Consul General emphasized that Bahria University which is located in Karachi is important considering that Karachi is directly adjacent to the Arabian Sea which is Pakistan’s export-import entry access through the Port of Karachi and the Port of Qasim.

The Rector of Hang Tua University, Prof. Dr. Ir. Supartono, M.M., CIQaR stressed the importance of cooperation in the field of maritime studies related to seafaring, port management, marine engineering, fisheries and oceanography. Indonesia is a very large maritime country to the “United Nations Convention on the Law of the Sea” (UNCLOS) on December 10, 1982, in Montego Bay, Jamaica, Indonesia’s sea area reaches 3,257,357 km², with sea/territorial boundaries from the continental baseline as far as 12 miles measured from the baseline, while the land area reaches 1,919,443 km² spread over 17,000 islands. Overall, the area of ​​sea and land reaches 5,176,800 km².

In line, the rector of Bahria University Vice Admiral (R) Kaleem Shaukat HI(M) conveyed the development and continuation of the collaboration between the two universities are very important by taking advantage of the strategic positions of the two countries. This cooperation is not only part of social and cultural cooperation but also part of Indonesia’s economic and maritime diplomacy, especially related to trade routes in ports and the potential for developing the fisheries and maritime industries of the two countries.