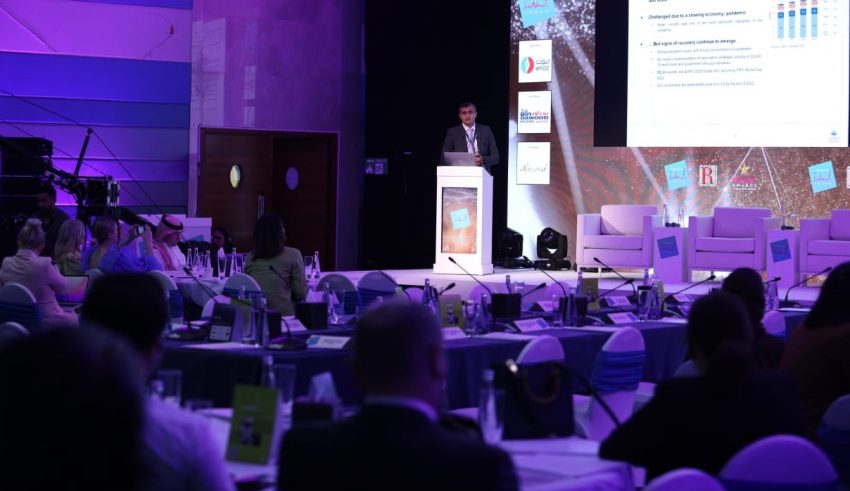 GCC retail sales is set to grow at a compound annual growth rate (CAGR) of 5.7 percent from US$296.8 billion (Dh1.09 trillion) in 2022 to US$370 billion (Dh1.35 trillion) in 2026, according to a latest report launched by Alpen Capital at the 11th Middle East Retail Forum which took off at the Jumeirah Beach Hotel on Tuesday, November 15, 2022, where more than 300 retail industry experts convened to brainstorm on the future of the retail industry.

“The retail industry in the GCC is undergoing transformation at an unprecedented pace and scale, having recovered from the COVID-19 pandemic. Signs of recovery continue with rising population levels, with a high concentration of expatriates, backed up by successful implementation of vaccination strategies, easing of COVID-19 restrictions and government stimulus measures,” Krishna Dhanak, Managing Director of Alpen Capital, told delegates at the opening session of the Forum.

“The GCC economies are expected to grow by 6.2 percent – way higher than the rest of the world average, which will further boost the retail sector. However, the growth will be underpinned by digitalization and growth in e-commerce business.

“The retail industry is benefitting from the positive sentiments in retail sales on the back of strong post-pandemic recovery, backed up by rising per capita GDP which is one of the highest in the world.”

Dhanak said, the recent measures undertaken by the governments of the GCC countries in relaxing visa regime, easing air travel has boosted the tourism industry, which will contribute to the growth in the retail industry in the coming years.

The Middle East Retail Forum (MRF) has become the most sought-after annual congregation for the top retailers in the Middle East who set the trends in the industry. The event for industry leaders, CEOs and other C-level professionals gives new direction to retailers on the changes, challenges and the opportunities. The MRF conference concludes with the annual Images RetailME Awards that recognizes the best performing retailers in different categories.

Welcoming the delegates, Justina Eitzinger, Chief Operating Officer of Images Group Middle East, organiser of the Middle East Retail Forum and Images RetailME Awards, said, “Retail is one of the top three contributors to the GDP of the Gulf countries and provides employment to a large section of the population. Tourism, trade and retail will dictate the economic growth of the GCC region in the next few years and that makes the 11th Middle East Retail Forum a very significant meeting of industry leaders from which the rest of the retailer sector will get direction for growth.

“Over the last one year we have seen how trade, tourism and retail sectors rebound, helping the economies to grow. And one of the reasons for stronger economic growth in the GCC is retail.”

Ashish Punjabi, Chief Operating Officer of Jacky’s Retail, said, retailers have done a great job in reviving the sector to the pre-COVID level.

“We are looking at a more exciting year ahead, with Chinese consumers expected to start travelling sometime next year,” he said. “Chinese consumers are one of the largest spenders in the luxury retail segment and they haven’t travelled for nearly four years. Once they start travelling to this region, imagine the jump in retail sales and we are looking at another boost in the retail industry.”

A recent survey by Ayden and KPMG, showed that 73 percent of businesses in the UAE grew in revenue by 20 percent or more in 2021 across retail, food, beverage and hospitality sectors – which is more than 67 percent higher when compared to the rest of the world and digital transformation has played a pivotal role to make this possible.

Yousef Almawy, Vice-President – Retail at Adyen, said, “Among those surveyed by us and KPMG, 94 percent retailers said they will invest in technology to grow their business. The future of retail will be dictated by consumers and their user experience that requires deeper consumer engagement backed with data analytics.

“A shift from omni-channel to a unified retail channel is the way forward for retailers. If we don’t have connected systems, we are not going to be there.”

Retail sales are likely to rebound and rise by 2023, led by projected increase in population and international tourist arrivals.

Naim Maadad, Chief Executive & Founder, Gates Hospitality, said, “The retail industry has firmly put the UAE in the global map. The question is how do we deal with the present and the future. We are all going to be part of the retail sector’s future as it evolves. However, there is no fixed manual for us to follow as we move forward – we script the manual that others might find useful.”

Echoing the same sentiment, James Scott, CEO, Grandiose Supermarket, said, “We are seeing a significant growth in the retail industry, in the economy and the liquidity situation. While the rest of the world is suffering from negativity and pessimism, the Gulf and the Middle East is an oasis of optimism. I see lots of optimism and positivity in the regional retail industry and I feel lucky to be part of such a vibrant economy.”

Justina Eitzinger, said, the Middle East Retail Forum and the RetailME Awards have become the industry benchmark convention and annual awards that everyone in the retail sector relate to and take pride in participating. It has become a matter of pride not only for the retailers, but it firmly has re-positioned the region in the global retail map.

Dubai Chamber of Commerce, one of the three chambers operating under Dubai Chambers, has a…