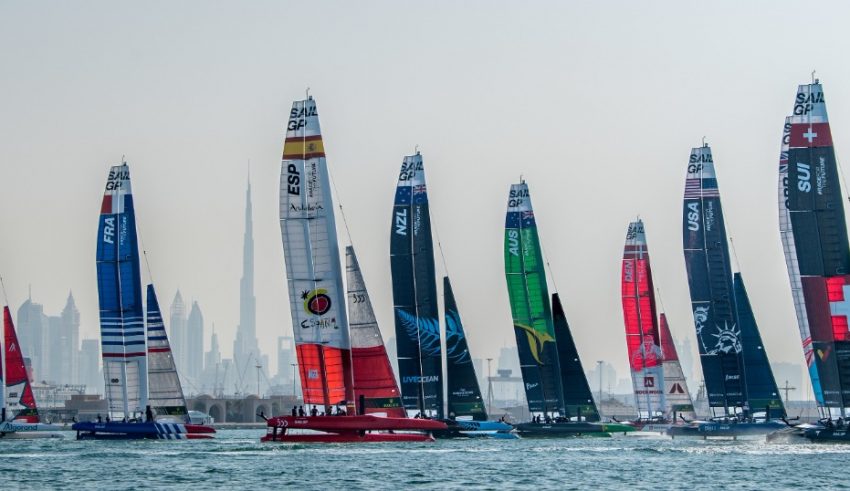 DUBAI: The SailGP title race has never been more wide open, with three different winners in the last three events, as the sport’s best athletes prepare for the inaugural Dubai Sail Grand Prix presented by P&O Marinas. On the spectacularly coloured waters of the Mina Rashid precinct in front of the globally recognized Dubai skyline, all nine F50s made their final preparations for the weekend’s racing at the official practice day.

Earlier at the pre-race press conference, with official partners from P&O Marinas as well as the Dubai Sports Council and Dubai’s Department of Economy and Tourism in attendance, drivers were predicting a thrilling weekend of racing on the tightest race course so far this season.

HE Saeed Mohammed Harib, Secretary General of Dubai Sports Council, at the press conference said: “Dubai continues its role as the regional hub for major global sporting events; a role that the UAE has proudly played since the 1990’s, gaining the trust of the global community through various successes in different marine events. We pass our best wishes to the organisers and athletes from around the world who will be competing this weekend.”

Dubai Sail Grand Prix Presented by P&O Marinas starts today (12 November) at 3.00pm local time and same time on Sunday (13 November). It is being televised live on Dubai Sports 3, and is set to draw in crowds in the thousands to the water-based arena at Mina Rashid.

Switzerland co-driver, Sébastien Schneiter said: “This racecourse is very good, we’re sailing right next to the wall, the fans could almost high five us when we’re tacking on the boundary so I think this event will go down in SailGP history as one of the best events for the fans. The flat water is really great for the F50, it means we can push the F50 really hard.”

Great Britain driver Sir Ben Ainslie agreed: “It’s going to be really tight and incredibly exciting for both the competitors and the spectators, it will come down to the tight boat-on-boat maneuvers and on such a tight racecourse, trying to get separation from the other boats because the moment you’re alongside too many other boats you’re all slowing each other down. The ones that find the space will probably be the ones that do quite well.”

For fans in Dubai, the platinum ticketing section is already sold out but a few final tickets are still available for the weekend in the event village. More information is available at SailGP.com.