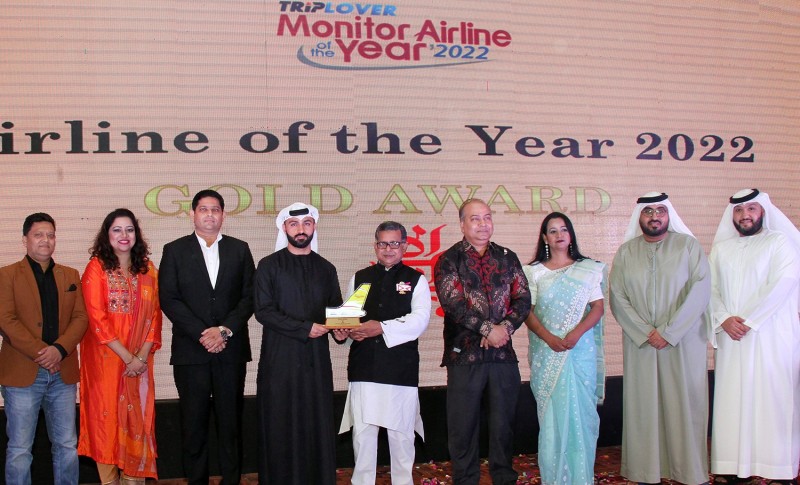 Honourable Md. Mahbub Ali MP, State Minister for Civil Aviation and Tourism, presenting the ‘Airline of the Year 2022’ gold trophy to Mohamed Alhammadi, Emirates’ Country Manager for Bangladesh and the Emirates team at the Monitor Airline of the Year awards ceremony held in Dhaka

Emirates has been named ‘Airline of the Year 2022’ in Bangladesh, clinching the top award in Monitor Airline of the Year for the third year in a row. In the award program, which celebrated winners during a ceremony held in Dhaka, Emirates bagged five gold and four silver trophies in recognition of its award-winning products and services.

Winners were selected based on a frequent flyer opinion poll conducted in Bangladesh over a period of three months this year, from April to June. The trophies were presented by the Honourable Md. Mahbub Ali MP, State Minister for Civil Aviation and Tourism in the presence of more than 200 guests including government dignitaries, diplomatic missions, airlines, leading travel agencies and media.

This is the third consecutive year that the world’s largest international airline has received the accolade of Airline of the Year and marks the seventh time Emirates has been deemed the winner in the top category during the past nine editions of Monitor Airline of the Year.

Monitor Airline of the Year is the only recognized and most prestigious award in the Bangladesh aviation sector, and is organized by The Bangladesh Monitor, the premier aviation and tourism publication. The award program recognizes the best airlines in various service categories based on the frequent flyers’ opinion poll. This year more than 2,000 frequent flyers had cast their votes for their favourite airlines, by rating their travel experiences in 13 categories.

Emirates has been providing Bangladesh with award-winning passenger and cargo services since 1986, reflective of the long-standing relationship between the country and the UAE. When Emirates launched its services to Bangladesh just one year after the airline’s inception, Dhaka became its 7th destination with Bangladesh being the 6th country, excluding its hub in Dubai, to be added to its global network.

The airline now connects Dhaka and Dubai with 21 weekly flights, providing access to over 130 destinations across six continents and is the only carrier to offer a First Class service to and from Dhaka.