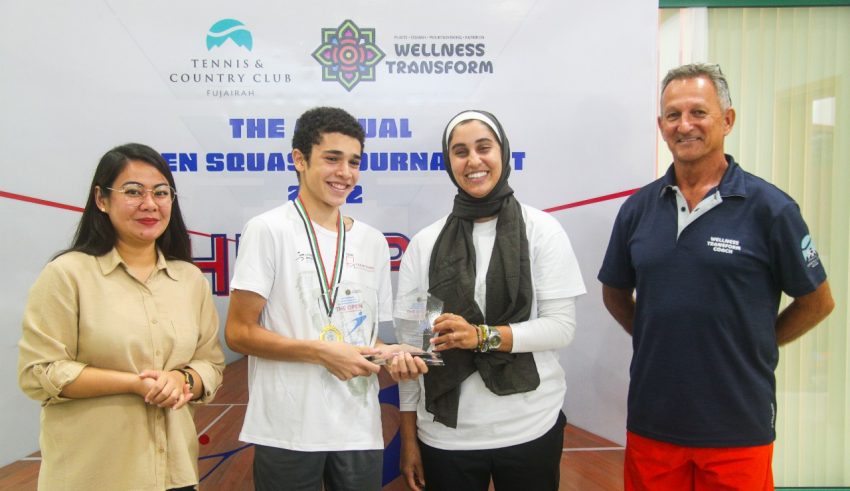 The Annual OPEN Squash tournament for juniors was held on the weekend of 17th and 18th September 2022 at the Tennis and Country club Fujairah. Once again, the beautiful setting of the Country Club squash courts was complimented by junior squash players (from across the UAE) who exhibited their skills, confidence, and commitment to a capacity crowd of families and friends.

For the past 2 years TCCF have hosted squash tournaments for juniors and seniors alike and the OPEN exceeded all expectations. In the under 9 age category final Abdul Rahman and Sara Elhamamy entertained the spectators with their commitment and personality traits. A great future awaits both two young players. Abdul Rahman eventually secured the under 9 title. The under 11 category was heavily contested with two of the most promising juniors in the UAE in the final. Zain Ahmed Fathi (Abu Dhabi) beat Alden Fernandes (Ras Al Khaimah) in a closely fought match by winning 3 games to 2.

Ms. Hania Reggi, Manager of TCCF commented that without the support financially and emotionally of parents and family, these juniors would not be able to participate at events of this nature. Ms. Reggi thanked the parents and coaches for their ongoing support.

“We are inviting all the junior Squash players from across, and outside of the UAE, to the much anticipated “Emirates Junior Squash Tournament” to be held on the 29th and 30th October 2022, at the TCCF in Fujairah. This event will become an annual celebration of squash, as was the case with the recently completed OPEN Squash tournament,” Jacques Harmse, Tournament Director, said. It is a unique and special opportunity for the best junior players across the UAE to come together to have fun, forge new friendships, and of course compete for the titles.”

In the Under 17 category Aley Afifi proved to strong for Zein Bahr (both players representing the Farah Momen Squash Academy). Aley then had to contest the Under 19 title against his older sibling Omar Afifi. Omar took home the coveted Junior OPEN Squash 2022 title after an exciting match in which both players displayed their exceptional racket skills and ball retrieving agility.

“Squash has been a consistently popular sport at school and club level and has the potential to grow significantly over the next few years, with so many other Emirates showing interest in participating in our tournaments,” said A. Ghafour Behrozian, Chairman of TCCF.