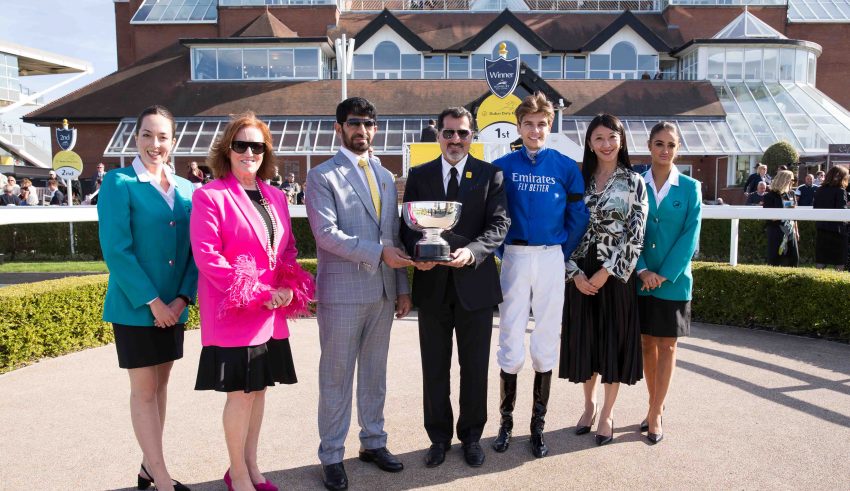 The meeting’s feature race, the Group 2 Dubai Duty Free Mill Reef Stakes capped a remarkable four-timer on the day for in-form jockey David Egan who had already won the first three races on the day’s card, and a treble for Newmarket trainer Roger Varian.  The prestigious event for juveniles celebrated its 50th anniversary running and commemorates one of the great racehorses in history.

“Everything clicked,” said trainer Roger Varian in the understatement of the day – it was his sixth winner at meetings around the UK.  His jockey David Egan said, “He gave me some feel.  I was blown away by his performance.”

“The Middle Park Stakes comes too soon (next week), “added Varian, “and Sakheer would have to be supplemented to the Dewhurst (seven furlongs). A day like this is only possible when you have a team that work together such as ours at Carlburg Stables.”

“We may think about the Prix de l’Abbaye on Prix de l’Arc de Triomphe day,” said Varian after taking the Group 3 sprint with Mitbaahy, again ridden by Egan.

The Group 3 GBP 70,000 Dubai Duty Free Legacy Cup went to Stay Alert, the only filly in a strong field. Trained locally by Hughie Morrison, Stay Alert brought top class form into the eleven-furlong contest having finished second to the Prix de Diane (Group 1) winner Nashwa at Newbury and earlier having triumphed in Listed class here at the Berkshire track. She again showed a liking for her home course.

Stay Alert was challenged on all sides by older colts and geldings but stayed on determinedly to fend them off.

Sheikh Mohammed Obaid Al Maktoum may have a Classic prospect on his hands with Exoplanet who made his winning debut as favourite. Exoplanet is entered in next year’s Derby and as an individual looks every inch worth the purchase price.

The feature race of the first day, Friday 16th September, was the Listed Dubai Duty Free Cup won in astounding fashion by the Cheveley Park Stud-owned Sacred. She loves Newbury having won the Group 2 Hungerford Stakes over the same seven-furlong course and distance last month.

“But she’s a funny old thing,” said trainer’s wife Maureen Haggas whose father Lester Piggott died earlier this year and who herself is still on the mend from a serious riding accident on Newmarket gallops. “She throws everybody off at home, but she has enormous ability and when she realises she’s dominating her rivals she just likes to rub it in.”  Sacred won by over six lengths.

Away from the action on the track, racegoers were treated Dubaian hospitality in the Dubai Duty Free Marquee where complimentary traditional Arabic coffee and dates were served together with the chance to win free gifts and free entry into the Dubai Duty Free Millennium Millionaire and Finest Surprise draws.