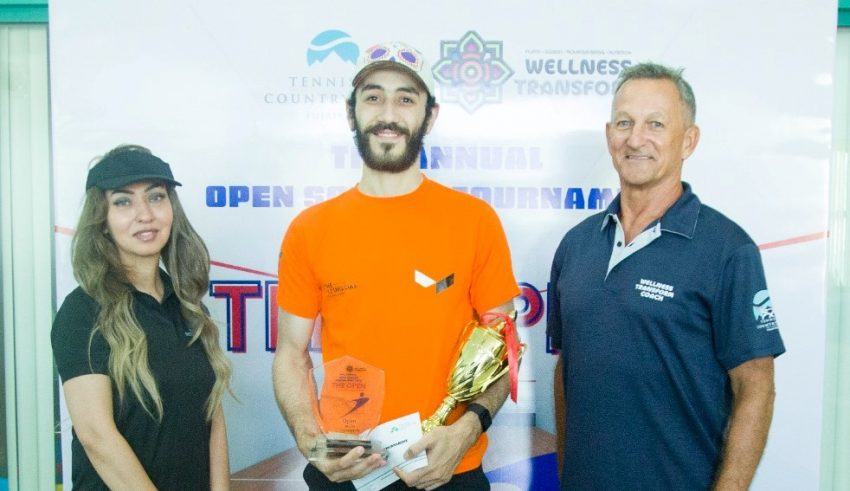 The Open Squash Tournament 2022, hosted by the Tennis Country Club Fujairah (TCCF) during the weekend of September 3 and 4, 2022, lived up to the emirate of Fujairah’s reputation for well-organized events. “The success of a sporting event is not determined by the number of participants or the volume of the crowd. It is the competitors’ enthusiasm, talent level, and sportsmanship throughout the championship. This past weekend, participants pushed themselves to their physical and mental limitations in an effort to become the inaugural champion of the Annual Open Squash Tournament, according to Tournament Director Jacques Harmse. Players from all across the UAE, representing a variety of countries, competed in four distinct categories: The Open, A & B divisions, and the newly added Masters level.

The Open was a fierce contest in which players with PSA rankings demonstrated their abilities. In the championship match, the top seed, Abdelaziz Amgad Hegazy (Egypt), defeated the second seed, Jehangir Khan (Pakistan). Prior to Abdelaziz being crowned the first Open Champion, both players shown a great deal of fervor and technical prowess.

In the A division, Omar Afifi (Farah Momen Squash Academy) prevailed over his younger sibling Aley Afifi to win the championship. Both young men exhibited bravery and sportsmanship during the match, demonstrating that squash is gaining popularity in the UAE.

In the B division, Eeshan Sawant defeated Anupam Pandey (Ras Al Khaimah) to win the championship. Eeshan demonstrated that his future is promising.

The newly added Masters division was won by Mohammed Tarik of Morocco, who faced Ali Debaji in the championship match. The masters category will undoubtedly expand as parents traveling with their children desire to also participate in the sport. Masters squash is a significant component of world squash on the international stage, according to Harmse.

Ms. Hania Reggi, Manager of the TCCF, reaffirmed, “The TCCF is a magnificent facility that guarantees an unforgettable squash and Fujairah experience on the East Coast.” “On the weekend of September 17 and 18, 2022, the best Junior squash players in the United Arab Emirates will compete in the Junior Open Squash Tournament in Fujairah, and I am confident that our emirate will once again demonstrate why we are the destination of choice for national sporting events,” Ms Reggi added.