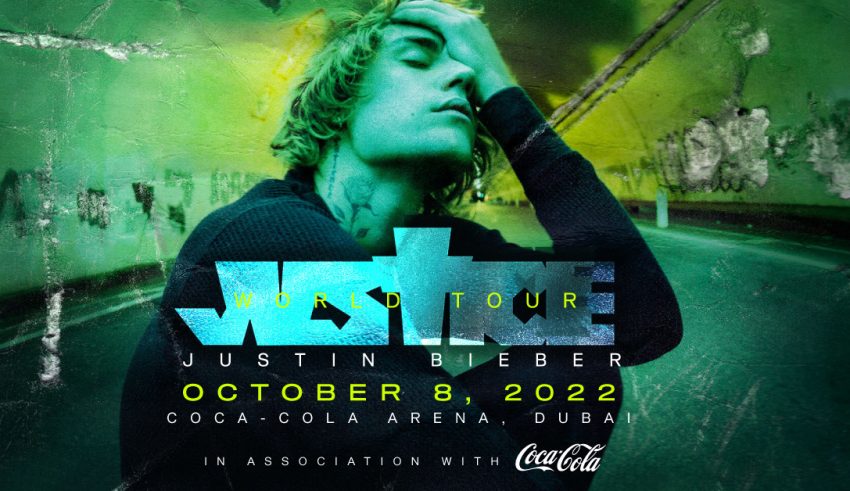 Justin Bieber today announced the final international dates for his record-setting Justice World Tour, including October 8th at the Coca-Cola Arena, Dubai. Having sold in excess of 1.3 million tickets so far, the tour will travel to over 30 countries — playing more than 125 shows – from May 2022 through March 2023.

Thomas Ovesen, owner of T.O.P Entertainment and the outfit responsible for bringing the show to Dubai said, ‘having Justin back for what will be his third visit and fourth performance in the city is so exciting, both for his fans and for me personally. The UAE hasn’t seen shows of this size and scale since pre pandemic and I can guarantee everyone is in for a real treat – the production is world class and there is no doubt Justin is at the very top of his game right now, the ticket sales worldwide speak for themselves! We look forward to welcoming all his Middle East fans this October – this is a hot ticket and we expect to sell out fast, so register for the Visa pre-sale now!’

Fans can register for the exclusive Visa pre-sale at www.coca-cola-arena.com. Pre-sale will start at 10am on May 26th and all fans who registered will receive the pre-sale link to purchase tickets.  General on sale will start 24 hours later on May 27th at 10am local time.

The upcoming dates start this month in Mexico, with a stop in Italy before continuing on to Scandinavia for shows in August.  Next up is South America, South Africa and the Middle East in September and October.  The tour will close out the year in Asia, Australia and New Zealand before moving to the UK and Europe in early 2023.  Additional dates have also been announced in Dubai, Bahrain, Sydney, New Delhi, Manila, Amsterdam, London and Dublin.

These new shows come on the heels of his 52-date 2022 North American tour, which kicked off in San Diego on February 18. Each evening promises to be a celebration for both Justin and his fans after the pandemic sidelined his 2020 tour.

Recently, Justin teamed up with director Cole Bennett for his new single +video “Honest,” featuring Don Toliver. Punchy and uptempo, “Honest” marks Justin’s first official single since “Ghost” – the anthemic finale to the multi-platinum, Grammy-nominated Justice – went #1 at pop radio in January, making chart history with the most #1 hits by a male solo artist in US radio history and the only fifth artist ever to reach twenty Top 5 hits on Hot 100.

Over the past year, Justin has set new marks in his highly-decorated career: “Stay” with The Kid LAROI, Justin’s eighth career Hot 100 #1 single, made him the youngest solo artist ever to reach 100 hits on the chart. “Peaches,” his certified-triple-platinum smash, made Justin the first male solo artist to debut at #1 on both the Billboard 200 album chart and Billboard Hot 100 singles chart simultaneously.

Justin Bieber’s eighth #1 album Justice has sold over eight million copies globally, amassed over 12 billion global streams, and was nominated for eight Grammys, including Album Of The Year. With an astounding 100 billion career streams and over 75 million albums sold globally, Justin reigns as one of the biggest artists in the world. Bieber is the #1 artist on YouTube with over 68 million subscribers worldwide and is the #1 artist on Spotify global with 79 million monthly listeners.

Justin – who was named Artist Of The Year at the 2021 MTV VMAs and was nominated for thirteen Billboard Music Awards – has been wowing fans nightly on the opening leg of his Justice World Tour 2022, the biggest and most ambitious tour of his career. Throughout, Justin has remained committed to using his platform for social good, bringing his ‘Justice In Action’ initiative to fans across the country, raising awareness on important issues like criminal justice reform, climate action, voter registration and much more.

The Justice World Tour, promoted by AEG Presents, is Justin’s first global outing since 2016/2017’s ‘Purpose World Tour’.  Described by The Times of London as “mesmerising”, Bieber played to 2.7 million fans over the course of his 2016-2017 run, with the finale seen by 65,000 fans at London’s British Summer Time Hyde Park festival.

A limited number of exclusive VIP Packages are also available. These exceptional offers can include an amazing selection of reserved seated tickets, custom merchandise and much more.

As part of the Justin Bieber World Tour, fans can enter for a chance to win an instant upgrade to VIP seating or a trip to meet Justin by taking action on Propeller to transform the criminal justice system with REFORM Alliance, fight climate change with NRDC, and support other important causes. The more actions a fan completes, the more they increase their chances of winning. Together, we can create tangible change.