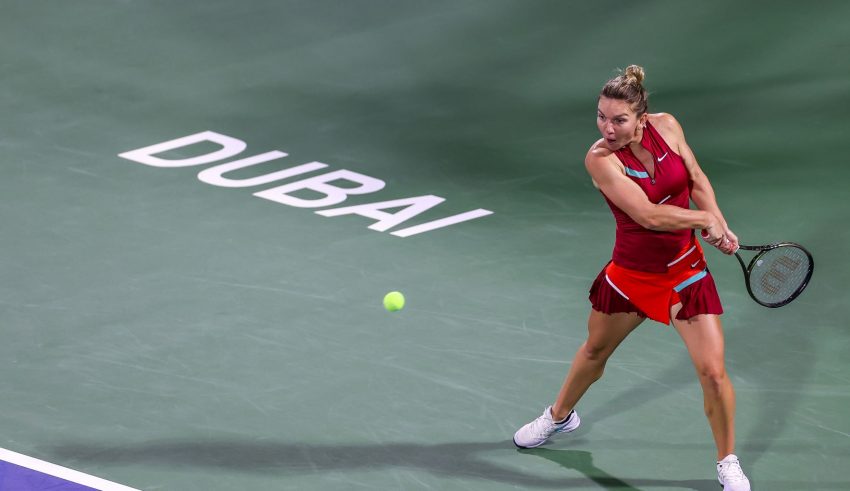 Two-time former champion Simona Halep held off a strong second set challenge from Alison Riske on Monday to earn a 6-2 6-4 victory and a place in the second round of the Dubai Duty Free Tennis Championships.

It appeared in the first set as if Halep was going to overwhelm her opponent as she sped to a 5-1 lead while giving up just one point on serve. And although she was taken to deuce as she served for the set, she not only held off the belated challenge but broke at love to begin the second set.

When Halep then led 40-0 on Riske’s serve for a 3-0 lead it seemed the match would come to a swift conclusion, but Riske dug in, fought off eight break points to hold for 2-1 and then held two break points to level at 2-2. But the American was unable to make further inroads and Halep went on to win on her second match point.

“We have seen some wonderful matches in which even those who have previously enjoyed great success in Dubai have had to fight hard to advance beyond the first round”, said Colm McLoughlin, Executive Vice Chairman and CEO of Dubai Duty Free. “Both our two-time champion Simona Halep and last year’s finalist Barbora Krejcikova, whose success here set her on the road to the world’s top 10, received a strong challenge, and we are certain to see many more entertaining battles in the days ahead.”

Second seeded Krejcikova was stretched by Caroline Garcia in each set before emerging with a 6-4 7-6 victory. Garcia made the better start, winning her first two service games at love before holding the first break point of the match to lead 3-1. But Krejcikova resisted the early pressure, held serve and then broke at love to lead 3-2 and that was enough to secure her the opening set.

After exchanging breaks to begin the second set, Krejcikova broke at love to lead 3-2 but then failed to serve out the match at 5-4, dropping her own serve at love before dominating the tiebreak 7-0.

Jessica Pegula earned a 6-4 6-4 win over her Dubai doubles partner, Cori Gauff. Both players struggled to gain an advantage, but although 10 breaks of serve suggests a scrappy battle there were many excellent rallies that provided great entertainment. Drama and uncertainty lasted right to the end, as Pegula had to fight off two break points before sealing victory on her fourth match point.

“We congratulate those who have successfully come through the qualifying rounds to reach the main draw,” said Tournament Director Salah Tahlak. “And although many of them have been drawn against formidable opposition, they will drawn confidence and inspiration from the fact that they have already won matches on these courts in the past few days. For that reason, none of the seeds they face will take their opponent lightly.”

The WTA event continues until 19th February, and then between 21st and 26th February the tournament celebrates the 30th anniversary of the ATP Tour 500 tournament when world number one Novak Djokovic will be bidding for his sixth Dubai title.