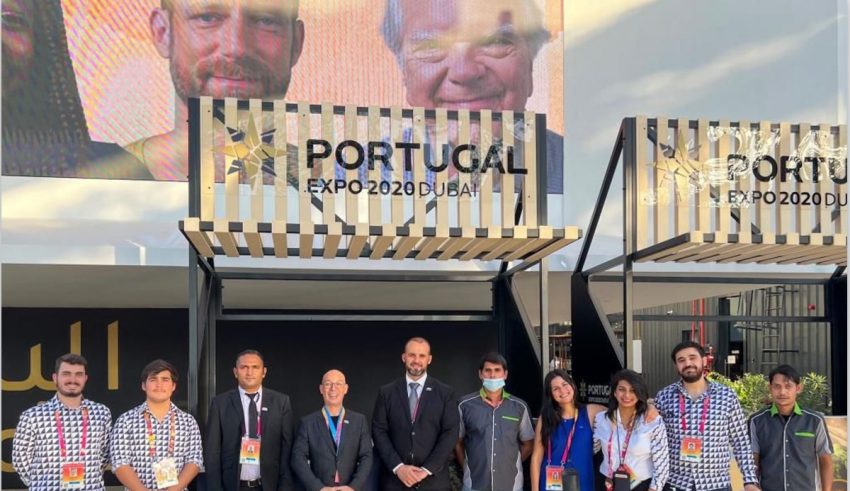 Portugal celebrated its National Day at Expo 2020 Dubai, on Friday, January 14th, with a series of cultural shows and a unique repertoire of Portuguese music, as well as a Business Seminar to promote Portugal as an investment destination. The celebration featured a commemorative postcard and an Arabic edition of two emblematic works of Portuguese literature.

The Executive Chairman of PLM Global (Official Pavilion Operator & Retail Specialists) Pedro Rodrigues said: “In almost 45 years of existence, there have been many valuable projects that PLM has implemented and/or helped to achieve.  This one, today, being Portugal’s National Day on the biggest stage in the world, which is Expo Dubai 2020, reached its highest point.  Thank you, Portugal, thank you AICEP and thank you very much to PLM’s team for this special moment of Joy”.

Joana de Almeida, PLM Head of  Corporate Affairs & Market Access, said: Congratulations to the amazing team that mastered this event managing 2 full days hectic agenda (and the large weeks of its design and implementation); the complexity of different government protocols in place; national and international media presence; Portuguese diaspora welcoming to the Portugal Pavilion; Portugal Business Briefing satellite event in addition to the normal operation of the Pavilion; the large amount of international guests that visited us during this week; at all the different parts of our presence at the Expo, including Al-Lusitano restaurant, & the ground floor open-door café”.

“We operate on the “biggest stage in the world”, in a geography that makes possible the existence of face-to-face events in a scenario that is still pandemic, in which visitors from all over the world comply with the safety regulations recommended by the WHO for months (hands, face, space, test, vaccine ). New normal assumed and we’re not allowed to fail its implementation.”

de Almeida concluded: “Yes, it’s business! But above all, it is with a sense of national mission that we approach daily life at the Portugal Pavilion. And it was with emotion that today we saw our flag raised and that we listened to A Portuguesa and to Prof. Marcelo Rebelo de Sousa kind message. We have “Portugal” written on our lapel and in the signature of our emails, we do not take it lightly!”

On the same day, Portugal celebrated the 116th anniversary of Livraria Lello, one of the country’s oldest bookstores, with a special Arabic edition of two emblematic works of Portuguese literature – Os Lusíadas by Luís de Camões and Mensagem by Fernando Pessoa. Followed by the launch of a commemorative postcard for the Portuguese Pavilion, made by CTT (national postal service provider).

On January 14th, Portugal’s National Day kicked off at 10:15 am (local time), with an Official Ceremony at Al Wasl Plaza, which was attended by Portuguese and UAE delegations, followed by the flag raising, Portugal’s national anthem and official speeches by high representatives. To closing ceremony, was a musical moment with António Chainho and Marta Pereira da Costa, on the Portuguese guitar, followed by a joint performance with Teresa Salgueiro.

“Portugal’s National Day was undoubtedly the highlight of the Portuguese participation at Expo 2020 Dubai. The cultural and economic programme we have in store aims to celebrate the very best of our country, our culture, and our talent, ultimately reflecting our biggest goal for this global event: to raise Portugal’s image across borders, particularly in the Arab world”, says Portugal’s Commissioner-General to Expo 2020 Dubai, Luís Castro Henriques.

The highlight of the National Day celebrations took place at 6pm in Jubilee Park, with the music and multimedia show Al Qantara (which means “bridge” in Arabic), created exclusively for this day. The concert premiered the original song Al Qantara, composed by Teresa Salgueiro and musician Fred Ferreira, featuring all of the event’s headliners, including portuguese guitar players António Chainho and Marta Pereira da Costa, along with traditional percussion group Retimbrar. Throughout those 2 days, the Portugal Pavilion hosted urban sketcher Tomás Reis, to create a sketchbook with unique illustrations of Portugal’s National Day, as well as the visitor experience at Expo 2020 Dubai.