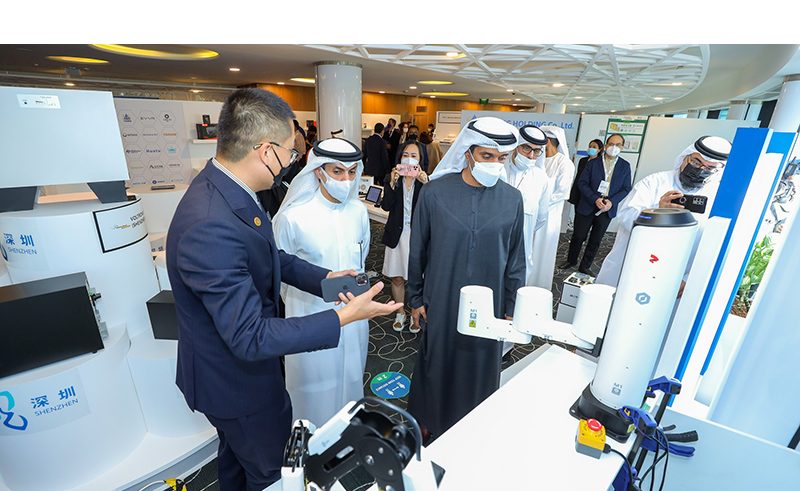 Over 300 public and private sector stakeholders from China and the UAE took part in the first Shenzhen Day Launch Ceremony and Products Show, a hybrid event held earlier today and streamed live in two locations – Dubai and Shenzhen.

The event, co-hosted by Dubai Chambers and the China Council for the Promotion of International Trade aimed to build new bridges between public and private sector stakeholders in Dubai and Shenzhen. It was joined by over 70 Shenzhen-based companies specialising in life and health, consumer electronics and intelligent security, that put more than 350 high-tech products on display.

Addressing participants in a special video message, H.E. Ali Obaid Al Dhaheri, Ambassador of UAE to China, Embassy of UAE in Beijing, spoke about the close business and cultural ties shared by the UAE and China and highlighted the significance of Expo 2020 Dubai as a key factor and catalyst that will further strengthen the countries’ comprehensive strategic partnership.

Addressing participants at the event, H.E. Abdulla Al Basti, Secretary General of the Executive Council, elaborated on UAE-China economic ties and noted that trade between the two countries reached $49 billion in 2020, while the value of Dubai-Shenzhen trade reached over $1 billion, adding that he expects bilateral trade to grow in the coming years following announcements by Shenzhen companies last year to establish operations in the Dubai market.

H.E. ShenFeng Zhang, Chief Representative of Chinese Government to EXPO 2020, and Vice Chairman of China Council for the Promotion of International Trade, described Shenzhen and Dubai as “friendship cities” and noted that the Chinese city was leveraging Shenzhen Day as a platform to hold a series of economic, trade and cultural exchange activities.

H.E. Zhang said he had high expectations for Shenzhen Day in terms of effectively promoting bilateral business exchange and cooperation between Shenzhen and Dubai, adding that the event would contribute positively to the China-UAE comprehensive strategic partnership.

For his part, H.E. Hamad Buamim, President & CEO of Dubai Chambers, said the strong participation in Shenzhen Day is a positive indicator of the growing interest on the part of government entities and businesses from Dubai and Shenzhen that are keen on exploring new avenues of economic cooperation.

A total of 120 bilateral business meetings were held during the event, he revealed, as part of the Dubai Chambers representative office in Shenzhen’s efforts to facilitate exchange and partnerships between the two business communities. He noted that since Dubai Chambers established its Shenzhen presence in 2019, the organisation has supported a number of Chinese tech giants and unicorns to successfully invest in Dubai.

“As innovation leaders, Dubai and Shenzhen would benefit by expanding their cooperation and knowledge sharing in new areas and fields such as high-tech equipment manufacturing, research and development, green and low-carbon, biological medicine, digital economy and marine economy. Through these efforts, we hope to attract many more innovative Chinese companies to Dubai that can support the emirate’s vision and transition to a global smart city and knowledge-based economy,” added H.E. Buamim.

The event featured a virtual tour of Shenzhen Day at Expo 2020 Dubai and concluded with a walking tour of the Shenzhen Products Show.

Etihad Rail, the developer and operator of the UAE National Rail Network, has achieved a n…