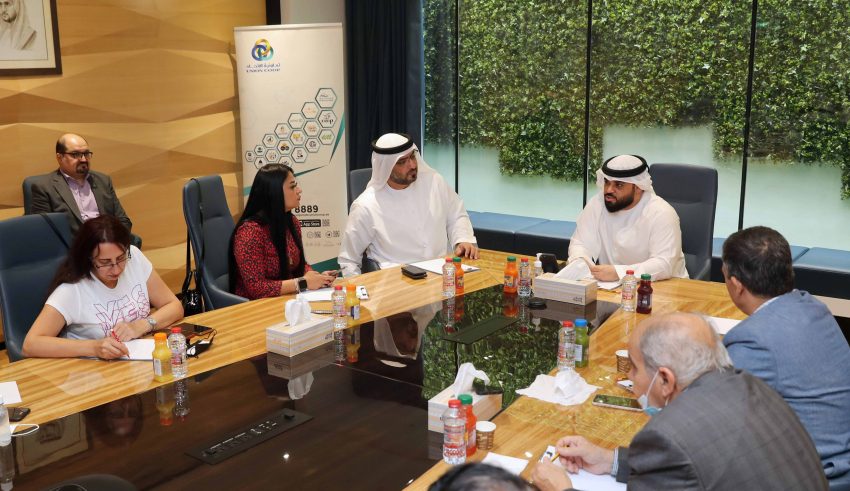 Coinciding with the nation’s celebrations of its golden jubilee, which coincides with the 50th anniversary of formation of the United Arab Emirates, Union Coop – the largest consumer cooperative in the UAE, revealed the launch of a grand promotional campaign as part of its national and societal contribution to the happiness of members of society, where the company allocated an amount of AED 50 Million to reduce the prices of thousands of goods, in addition to offering various valuable prizes to consumers during the 100-day promotional campaign period, starting from November 10, 2021.

This announcement came during a press conference held at Union Coop’s headquarters at Al Warqa City Mall, in the presence of H.E. Khalid Humaid Bin Diban Al Falasi, CEO of Union Coop, Dr. Suhail Al Bastaki, Director of Happiness and Marketing Dept., and part of Divisions and Dept. Directors and Managers from Union Coop, and representatives of Arab and foreign media outlets.

On this occasion, the CEO of Union Coop, H.E. Khalid Humaid Bin Diban Al Falasi, at the beginning of the press conference, extended his warmest congratulations to the wise leadership of the UAE and the citizens and residents of the country on the occasion of the country’s celebrations of its golden jubilee, which coincides with the 50th anniversary of formation of the UAE, noting that Union Coop will launch a major discounts campaign for 100 days, in addition to giving prizes and discounts and reducing the prices of goods at a total cost of about AED 50 Million.

He also indicated that the campaigns and initiatives, which coincide with the country’s celebrations of its golden jubilee, are in line with the basic objectives of the UAE and the Union Coop of spreading community happiness, noting that the company is keen throughout the year to offer promotional offers whose main goal is to reduce the burden on consumers by providing the best products at a competitive value.

He pointed out that the initiatives for ‘Year of the 50th campaign’ includes daily raffles where prizes and vouchers have been allocated, in addition to the discounts and price reduction campaigns that include thousands of basic commodities, in a way that supports price stability and brings pleasure to the hearts of all consumers, and provides many opportunities for consumers to obtain their needs at low prices during Year of the 50th (National Day) holiday.

He added that the Union Coop initiatives on the occasion of the nation’s celebrations of the 50th anniversary of its formation are numerous, including the Raffle draws of daily prizes that include 50 winners with smart phones, 50 winners with gold bars, 50,000 Tamayaz points for 50 winners, and 50 winners for mountain bikes, in addition to an initiative dedicated to those born in 1971 by gifting them an Afdhal Card with cash value  for free shopping, as well as raffles and other prizes allocated to shoppers through its Smart Online Store (Application).

He added that Union Coop will reduce the prices of 20,000 commodities and products, for 100 days, with discounts exceeding 50%, pointing to the initiative of discounts and promotions that include basic food and consumer goods, including rice, meat, poultry, canned food, fruits, vegetables and other products, noting that the promotional campaigns took into account cultural and population diversity in the country, as the campaigns included a variety of products that meet the needs of all communities that reside here, stressing that Union Coop contracts with suppliers, official dealers and agencies for products with strict conditions and procedures, as it pays great attention to the issue of the quality of products and fresh or long-term goods, He explained that Union Coop’s internal procedures are strict, as the health certificates of the products are checked daily, in addition to certificates of origin, customs and regulatory authorities in the country or abroad.

He added that Union Coop, on the occasion of the golden jubilee and the nation’s celebrations of the year of the 50th (National Day), launched the initiative for free delivery of all orders that will be ordered through its Smart Online Store (Application) for 50 days during the National Day campaign, to allow shoppers to enjoy shopping on this cherished occasion and to benefit from promotional offers and as a plan to reduce burdens on consumers.

He pointed out that the retail sector and consumer markets in Dubai are considered the best in the region in terms of product type, price and quantity, and this is evident by the continuous launch of competitive promotional campaigns, pointing to the real contribution of Union Coop with the wise government in bringing joy and happiness to the hearts of community members during happy national occasions.