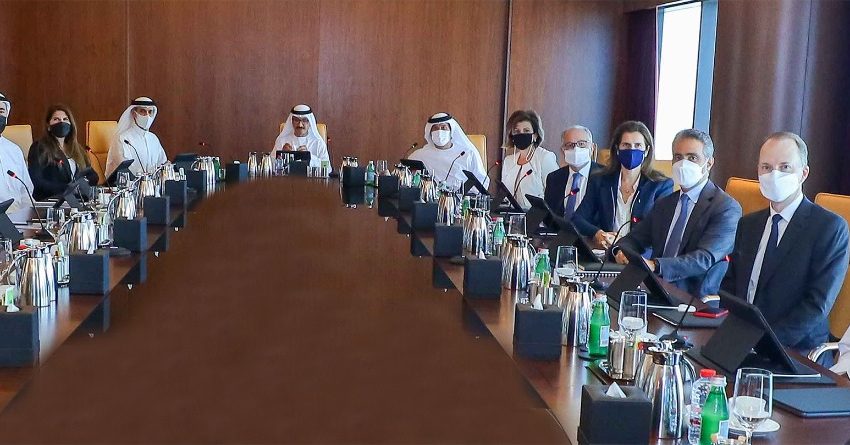 The board discussed ways to leverage the Chamber’s international network to tap into the 30 priority markets, which have been identified as high potential markets that can accelerate the growth of Dubai’s foreign trade. Member companies of Dubai International Chamber will work towards achieving target of boosting Dubai’s foreign trade to AED 2 trillion within the next five years, consolidating Dubai’s position as global trade hub

HE Sultan bin Sulayem, stated that trade is the cornerstone of Dubai’s economy and essential for its diversification and stated that the new board will focus its efforts on implementing as new strategy announced by His Highness Sheikh Mohammed bin Rashid Al Maktoum, Vice President and Prime Minister of the UAE and Ruler of Dubai, which aims to boost Dubai’s foreign trade to AED 2 trillion within the next five years and cement the emirate’s position as global trade hub.

“Through integrated plans, the chamber will target new international markets and support the expansion of national companies abroad. The chamber will also support and integrate global investors, entrepreneurs and talent into Dubai’s flourishing business community within a comprehensive framework that ensures providing an agile pro-business environment,” said HE Bin Sulayem.

“I am confident that the Dubai International Chamber will not only achieve its new targets but take Dubai’s trade ties with promising markets to the next level. The Chamber is already in strong position to achieve its objectives as it can leverage Dubai Chambers’ resources and vast network of international representative offices across Africa, Eurasia and Latin America,” he added.

Dubai International Chamber was established to strengthen partnerships with global corporations, investors and entrepreneurs and boost Dubai’s status as a major trade hub. Adopting a more specialised approach to driving Dubai’s foreign trade, the chamber will promote the opportunities that the emirate offers in facilitating trade flows.

The Chamber was established under the directives of His Highness Sheikh Mohammed bin Rashid Al Maktoum, Vice President and Prime Minister of UAE and Ruler of Dubai, as part of a recent government restructuring that aims to drive a comprehensive economic development in Dubai.