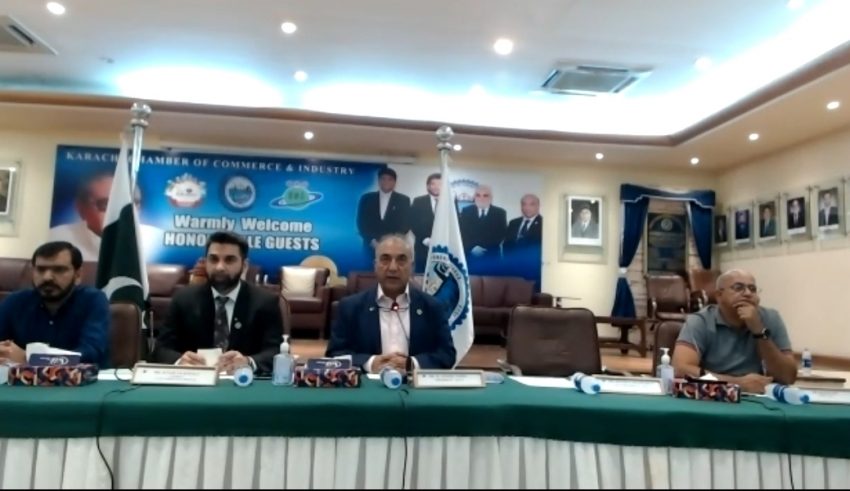 KARACHI: Director General Federal Investigation Agency (FIA) Dr. Sanaullah Abbasi, while responding to KCCI’s suggestion, assured to look into the possibility of providing online facility for hearing to the members of business community in order to save them from travelling all the way to FIA circles in far-flung areas where they were being summoned by officials to clarify their position.

DG FIA Sanaullah Abbasi stated that it was the motive of FIA to fully serve and facilitate the business community and provide maximum possible solutions to the problems, besides paying special attention to business community’s suggestions as they, being the backbone of the country, generate economic activities.

He also nominated Director FIA South Amir Farooqi as the focal person for dealing with complaints being raised by the Karachi Chamber which would further improve coordination between the two institutions.

Referring to suggestions given by General Secretary BMG AQ Khalil, Sanaullah Abbasi assured that these suggestions after consultation with FIA team will certainly be incorporated in the policy with a view to improve visa on arrival facility at the airports.

While briefing the meeting participants about numerous initiatives taken for promptly dealing with digital banking and cybercrime cases, he said that it has always been his priority to ensure business-friendly approach while dealing with all such cases so that the economic activities were not stalled. “Cybercrime has been rising as we are receiving a lot of complaints. Hence, we are making all out efforts and will try our best to resolve such complaint at the earliest”, he added.

Speaking on the occasion, General Secretary BMG A.Q Khalil underscored the need to simplify the visa on arrival facility at the airports as the foreigners, particularly businessmen face immense hardships in availing this facility mainly due to poor attitude of FIA officials deployed at the airports. “Under the existing policy, a Deputy Director of FIA is whole & sole responsible for either issuing or rejecting visa to any foreign investor without consulting with any Chamber of Commerce or relevant local businessmen. Such bureaucratic hurdles create a lot of problems and at many occasions as some of the credible foreign investors face deportation that needs to be given special attention as it sends a negative message about Pakistan”, he added.

He further advised DG FIA to publicize the progress reports and achievements in dealing with the menace of cybercrimes as a lot was being claimed but nothing much has been publicized. “Pakistan has remained in the grey list of FATF from quite some time now and we are not much acquainted about our shortcomings whereas

it has also been observed that FIA has been constantly intervening in business transactions hence, the FATF conditions for money laundering have to be effectively highlighted so that the business community could comply to the same and accordingly carry out their transactions”, AQ Khalil suggested.

President KCCI Shariq Vohra, in his remarks, stated that FIA’s perception has been gradually improving all over the country due to dedicated efforts being made by officers like Sanaullah Abbasi who has been striving really hard to serve the country. “However, we request DG FIA to also take look into the matter of large number of notices being issued to the members of the business community by FIA which are a major source of harassment”, he added.

In order to promptly resolve numerous issues being faced by the business community, he advised DG FIA to nominate a focal person from FIA who could look into the issues being raised by Karachi Chamber so that they could be amicably and effectively resolved.

Expressing deep concerns over notices being issued to KCCI members from FIA circles in Multan, Faisalabad and other far-flung areas where FIA officials ask relevant businessmen to appear physically for hearing or face severe consequences, Chairman of KCCI’s Law & Order Subcommittee Junaid ur Rehman underscored to devise an effective mechanism for holding all such hearing in Karachi and if the cases were found not so serious, these should be immediately disposed of without creating more difficulties for businessmen and industrialists.