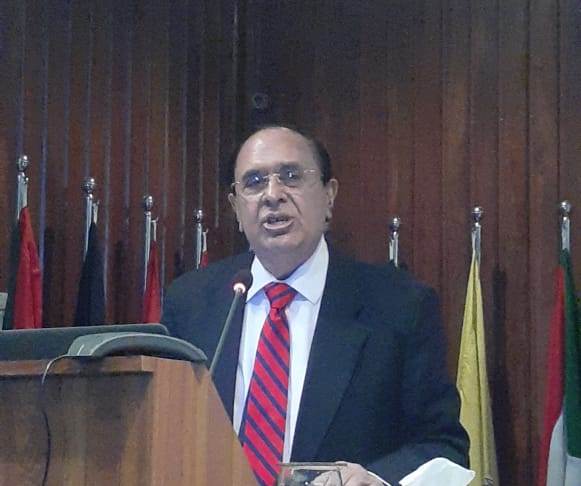 Prof. Dr. Atta-ur-Rahman, Chairman of Prime Minister’s Task Force on Science and Technology, has underlined the importance of the bilateral relations between Pakistan and China, saying that Pak Austrian University of Applied Science and Engineering was established in Haripur, Hazara with the partnership of five Chinese universities.

The establishment of the Sino-Pakistan Cooperation Center for Traditional Chinese Medicine (TCM) at the International Center for Chemical and Biological Sciences (ICCBS), University of Karachi is really phenomenal that will open new horizons for researchers to have new discoveries in the field of traditional medicines.

Prof. Rahman pointed out that Pakistan should take a lesson from China, as China had made great progress in every sector of development. The close relations between Pakistan and China on the fronts of science and technology, higher education, and Information Technology are fostering with each passing day, he added. We have established 150 centers across the country, while the establishment of Pak Austrian University of Applied Science and Engineering is one of my achievements, he informed the symposium.

Dr. Azra Fazal Pechuho said that the establishment of the Sino-Pakistan Cooperation Center for Traditional Chinese Medicine would play a vital role in the promotion of traditional medicines in both countries. She said that ICCBS– University of Karachi was contributing its role remarkably in the area of research and higher education.

Prof. Dr. Khalid M. Iraqi welcomed the national and international participants on the occasion. Highlighting the role of the ICCBS – University of Karachi in the ongoing pandemic, he said that the international center had played a significant role in the national fight against the pandemic of Covid-19. He said, “The University of Karachi owns 53 departments and 23 centers, while ICCBS is one of our centers of excellence.”

He said that Pakistan and China owned strong collaboration especially in terms of CPEC (China Pakistan Economic Corridor) which is a framework of regional connectivity. The free use of Chinese Covid-19 in Pakistan is a great sign of strong friendship between the two countries.

Pakistan’s Ambassador in China Mr. Moin ul Haque, in his online speech, congratulated Chinese and Pakistani officials for establishing a useful Sino-Pakistan Cooperation Center for Traditional Chinese Medicine at the international center, and said that around 80 percent of the world populations rely on herbal medicines, while Unani and Chinese traditional medicines were practiced in Pakistan for centuries.

Prof. Dr. M. Iqbal Choudhary said that the new center would perform R&D on traditional Chinese medicines, and clinical trials to prove their efficacy to help suffering population of Pakistan.

He pointed out that the seven decades of relationship between the two brotherly counties were now translating into institutional collaboration. The ICCBS as a center for excellence owns an international stature in the field of science and research, he said, adding that our institution is conducting numbers of clinical trials on various Chinese medicines. He said, “ICCBS was the only institution in Pakistan which was not only certified by ISO but it also became ‘UNESCO Centre for Excellence Category-2 Institute’.”

In the end, various MoUs were also signed between Pakistani and Chinese institutions.