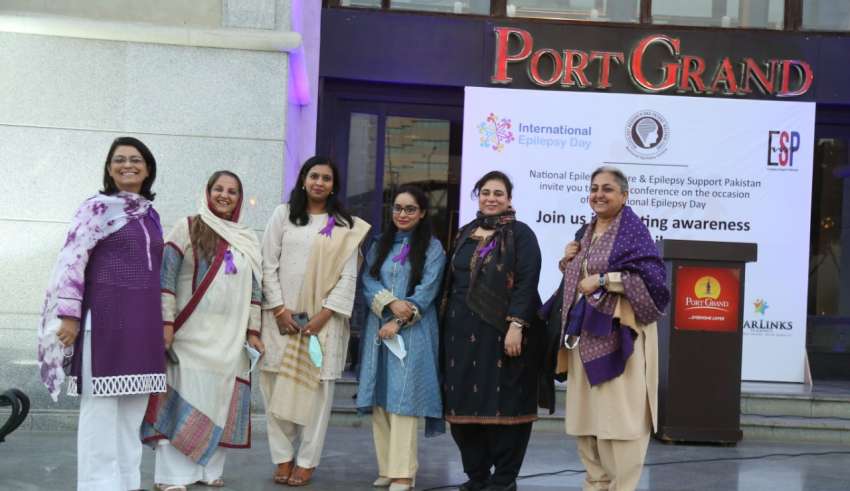 Karachi, February 8, 2021: International Epilepsy Day, a global event celebrated annually on the second Monday in February, to promote awareness of epilepsy around the world was celebrated here earlier today by National Epilepsy Centre.

Held in collaboration with Port Grand and Starlinks PR, NEC (National Epilepsy Centre) held a press conference after dusk in the open and fresh air of the port which had been beautifully lit up in purple – the colour of epilepsy. In fact,Epilepsy Support Pakistan and Epilepsy Association of Pakistan in collaboration with National Epilepsy Centre, JPMC and D C South Karachi celebrated International Epilepsy day by lighting up prominent public buildings in purple, (lavender is believed to help people with epilepsy). Large mobile awareness banners that were visible from a significant distance were also displayed at prominent spots in the city.

The programme began with a welcome address by Dr Hiba, followed by an introduction of NEC and Epilepsy Support Pakistan by Dr ZarineMogal. A presentation on epilepsy and the availability of its effective treatment, as well as messages by Dr Seemi Jamali, executive director JPMC, and Dr Samuel Wiebe, president ILAE, was shown to those present, largely comprising media. Emeritus Prof. Hasan Aziz, president Epilepsy Support Pakistan and Dr ZarineMogal, president Epilepsy Association of Pakistan in a joint statement explained the importance of raising epilepsy awareness:

“Epilepsy is a treatable neurological disorder which unfortunately remains untreated because of lack of public awareness. Highly stigmatized and socially marginalized, people with epilepsy need our support and encouragement for them to become contributing citizens of Pakistan. Late Abdul Sattar Edhi is a shining example of a person with epilepsy. Let us join hands and create awareness in whatever way we can that epilepsy is a treatable medical disorder, and is not due to supernatural causes. See your doctor and get treated. Epilepsy is a chronic disease and this message should be continuously disseminated not only today but every day. We request spread of this message through every possible media.”

Sara Jawed, PAS Assistant Commissioner South also spoke on the occasion and expressed her full support to NEC and appreciation of the great work they have been doing in creating awareness and treating epilepsy patients practically free of cost.Shahid Feroz, president Port Grand also expressed his appreciation for the great work being done by NEC and committed his continued support to the cause.

Shanaz Ramzi, CEO StarLinks gave the vote of thanks, after which high tea was served.