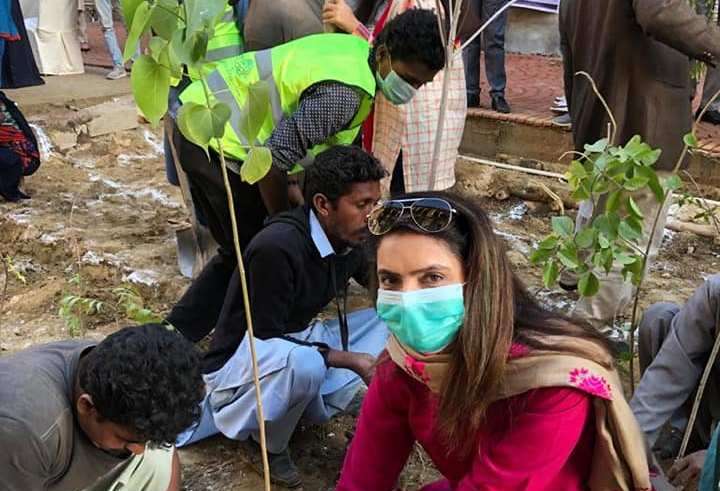 Rotary Club Karachi New Central and Starlinks PR joined hands with Heritage Foundation in 2019 to undertake the cleaning of Denso Hall and create awareness about the need for and proposal to pedestrianise Marriott Road. For four Sundays they gathered on Marriott Road to hold street festivals, clean the heritage sites on the street, and win the confidence of stakeholders.

The result of persistent efforts over two years, which included the digging and deep cleaning of 800-feet-long specially designed trenches in order to remove visually disrupting overhead hanging electrical and other cables and placing them there, and removal of extraneous material on footpaths, shops and pavements, is the initiation of the 400-foot-long low-carbon eco-enclave consisting of pathways lined with terracotta cobbles along with four groves of Miyawaki forests and three foods courts in the middle.

The purpose of the event today was to show the world that work at Marriott Road is in full swing and hopefully will be completed in two months. While the cost of pedestrianizing the street has so far solely been borne by Heritage Foundation through their own donors, it is now hoped that crowd-sourcing will see the completion of the walking trail as envisioned by Lari, linking Custom House in the west to Empress Market in the east, thus providing an opportunity for Karachiites to take ownership of their city.

Denso Hall Rahguzar presents a unique example of collaboration between civil society and government organizations along with efforts of other stakeholders such as shopkeepers. It demonstrates how an area ridden with complex issues could be transformed through collaborative effort without resorting to public funds. Any funds raised through sponsorships will be utilized for the creation of the next eco-enclave in the area.