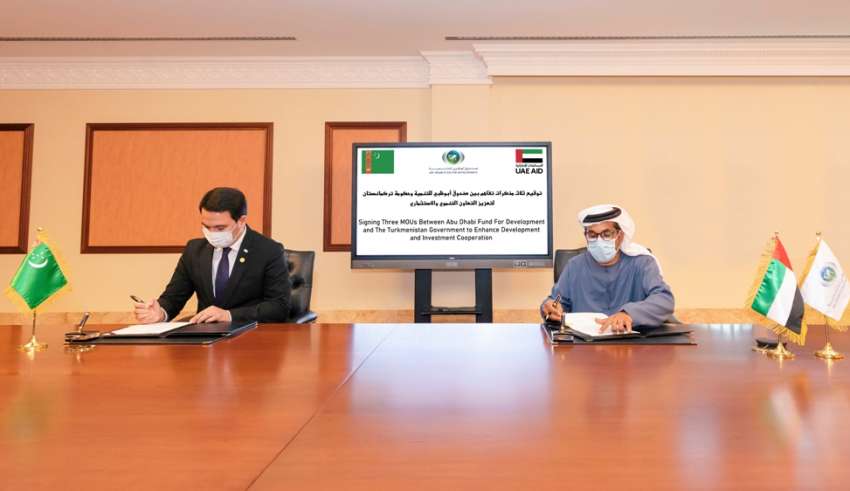 ADFD and Turkmenistan signs MoU over Economic and Development Cooperation

ABU DHABI: Abu Dhabi Fund for Development (ADFD) yesterday signed three memoranda of understanding with the Government of Turkmenistan aimed at strengthening economic and development cooperation through investment in vital sectors that would benefit economies of both countries.

The first memorandum of understanding (MoU) involved the establishment of an investment company in Turkmenistan with a target capital of AED 370 million (US$100 million), whereby investment opportunities and development projects are to be presented for ADFD’s considerations. In the initial stage, ADFD and Turkmenistan will contribute AED58.7 million (US$16 million) for investment in vital sectors such as energy, agriculture, tourism and industry. This amount will be shared equally by the two parties. According to the agreement, the Turkmen government will present project proposals to ADFD for financing, after which the Fund will take its decision based on its feasibility assessments.

The second MoU provides for studying the possibility of investing in a project to establish a chemical industry complex in Turkmenistan for AED642.7 million ($175 million) to produce polyvinyl acetate.

The third agreement creates the possibility to study opportunities to finance infrastructure projects in various sectors, including renewable energy and air transport, thereby promote cooperation between ADFD and Turkmenistan.

“The memoranda of understanding reflect ADFD’s keenness to expand its investment and economic partnerships with the government of Turkmenistan,” HE Al Suwaidi said. “They also represent a quantum leap in the economic cooperation between the UAE and Turkmenistan”.

He noted that the two-decade relationship between ADFD and Turkmenistan were founded on trust and mutual respect. “The Fund has been working as a strategic partner of Turkmenistan for about 20 years to meet the sustainable development goals. The MoUs will further contribute towards achieving development priorities of both sides through meaningful investments.”

HE Jepbarov praised the UAE over the constructive role it played through ADFD in financing infrastructure projects in developing countries. He pointed out that the MoUs would strengthen bilateral relations. “They will create new economic opportunities for us, which will help us to drive the growth of economies of the two countries,” he said.

Abu Dhabi Fund seeks to forge strategic partnerships with various countries and contribute to their economies by financing development projects.

The Fund, which started operations in Turkmenistan in 1999, had financed the rehabilitation of the Archman Hospital and establishment of a speciality hospital in Ashkhabad at a total cost of about AED 182 million. The projects contributed to an overall development of the country’s health sector.