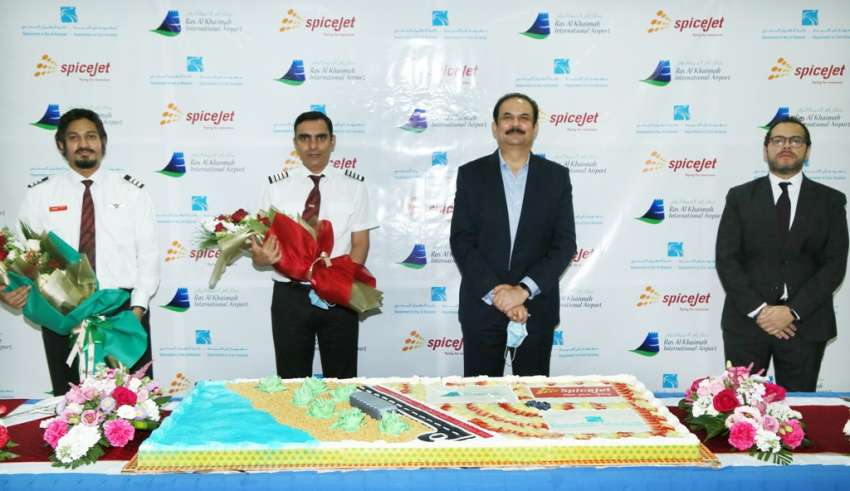 Now passengers with SpiceJet – India’s most popular airline by numbers of people carried –  are able to fly to Mumbai, Cochin, Amritsar, Lucknow and Jaipur from Ras Al Khaimah, as well as enjoy more frequencies from its existing Delhi-Ras Al Khaimah-Delhi route. The addition of the five new destinations and increased number of services from Indira Gandhi International Airport comes just two months after the airline established its inaugural service to Delhi from RAK Airport.

Spokespersons for SpiceJet and RAK Airport say that the development reflects the demand for commercial passenger services between India and the UAE – a demand that is bucking the trend of the aviation sector’s downturn – and that it is building on the new era of connectivity between India and Ras Al Khaimah, which was established with the commencement of SpiceJet’s passenger operations from the emirate in November last year.

“We are delighted to announce that we have added Mumbai, Cochin, Amritsar, Lucknow and Jaipur to our India-Ras Al Khaimah schedule, as well as increased our number of flights to and from Delhi. This shows just how in demand our services are and that we are successfully able to counter the overall decrease in aviation activity. We put this down to the incredible value and choice that we offer our passengers. SpiceJet has flown with the highest occupancy of over 90% in India for a record five years now, which is a testament to our continued popularity. The addition of our new flights to Ras Al Khaimah will both meet existing requirements for flights to and from the UAE and India as well as help fuel new demand,” said Ajay Singh, CMD SpiceJet.

“SpiceJet has been a vital partner for us since we signed an MoU with them in 2019 and they are playing a major role in our expansion plans, which are to deliver more services to a greater number of destinations across the Indian sub-continent as well as to the rest of the world. This new tranche of services from SpiceJet will further enhance our role as a vital transport hub for the UAE. We are an important factor in Ras Al Khaimah’s drive to attract 2.9 million visitors per year by 2025 and in its economic diversification strategy, of which tourism is a central element. We are working hard to attract more airlines to our facility and expect our operations to grow significantly this year for the anticipated post-Covid-19 economic bounce and Expo 2020 in October,” said Sanjay Khanna, CEO of Ras Al Khaimah International Airport.

The partnership between SpiceJet and RAK Airport has resulted in the cheapest return flight ticket and the ticket price including free road transportation (passenger pick-up and drop-off) from the emirates of Abu Dhabi, Dubai and Sharjah. The two companies say that they expect to announce further cheapest available flights with the introduction of more new services from SpiceJet through RAK Airport in the coming months.