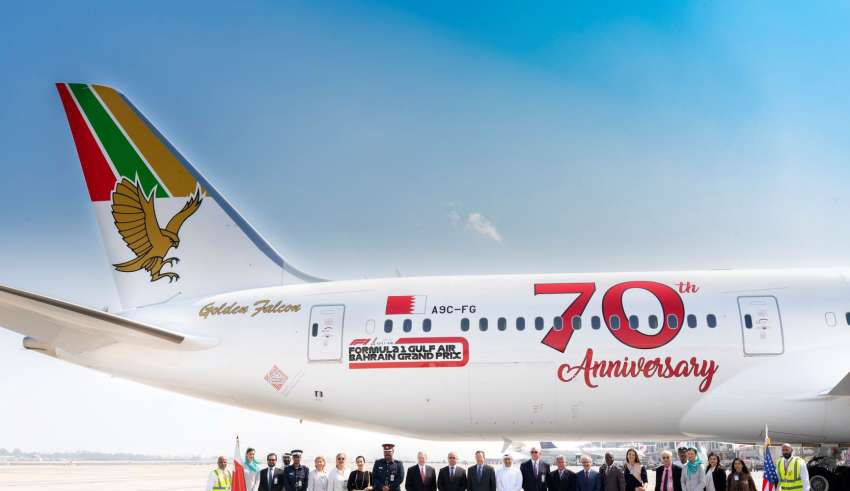 MANAMA: H.E. Justin Siberell, the Ambassador of the United States of America to the Kingdom of Bahrain, was recently welcomed by Gulf Air’s executive management at Bahrain International Airport and toured the airline’s flagship aircraft, the Boeing 787-9 Dreamliner which recently entered the airline’s fleet in the 70th anniversary livery. The visit is part of ‘Discover America Week’ (October 24 – November 1) which included attendees from the Embassy of the United States of America, the American Chamber of Commerce in Bahrain, Boeing and members of the local media. Gulf Air’s Chief Executive Officer Mr. Krešimir Kučko and Deputy Chief Executive Officer Captain Waleed Abdulhameed Al Alawi met H.E. Justin Siberell to tour Gulf Air’s Boeing 787-9 Dreamliner fleet and to discuss long-term network expansion plans, which will see the airline reach North America in the near future.

Commenting during the event, H.E. Justin Siberell the Ambassador of the United States of America to the Kingdom of Bahrain said: “We are here as part of our ‘Discover America Week’ celebration, and this year we are focusing on transportation, logistics and tourism in particular.  So, there is no better way to do so, than to have an opportunity to see the newest 787 Dreamliner that has joined the Gulf Air fleet”. He also added: We are very excited to see this relationship between a great Bahraini company ‘Gulf Air’ and a great American Company ‘Boeing’.  To see this new partnership, which is enabling Gulf Air to open new long-distance roots using the world’s most modern, and most advanced aircraft is really exciting. It shows that while we have a long-standing partnership between the United States and Bahrain, going back many, many decades, we are establishing the future here, to grow the relationship well into the next decade.  So, it’s a very exciting opportunity, it’s a beautiful plane. The service is fantastic and so it’s a really good opportunity for us to celebrate this partnership again today”.

On his part, Gulf Air’s Chief Executive Officer Mr. Krešimir Kučko said: “Today we welcomed His Excellency to tour our flagship aircraft the Boeing 787-9 Dreamliner and explore its state-of-the-art facilities and features. Gulf Air currently operates 7 Dreamliners and by the end of 2020 we will receive the remaining of our 10 aircraft order with Boeing”. He also added: “As we celebrate our 70th anniversary next year, we are proud to expand our fleet and network to serve the Kingdom of Bahrain and our customers with superior products and services. The visit further solidifies our commitment as key players in the economic bond between the Kingdom of Bahrain and the United States of America as we align our strategies to include the United States on our list of countries that we will operate to.”

Recently Gulf Air received its 7th Dreamliner which will be followed by the delivery of three more by the end of 2020. BIZ TODAY MONITOR