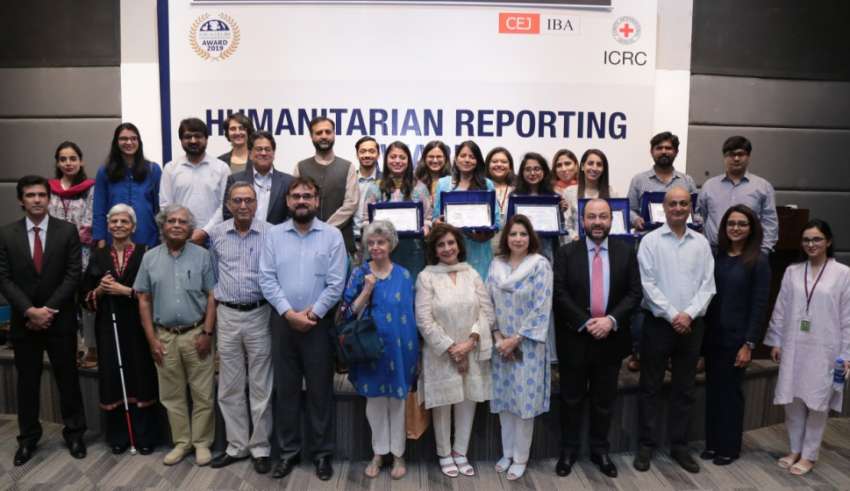 KARACHI: Awards were conferred on seven journalists for outstanding contributions in humanitarian reporting at the Humanitarian Reporting Awards, 2019, on 24th October. The Awards were jointly organized by the Centre for Excellence in Journalism at the Institute of Business Administration (CEJ-IBA), Karachi and the International Committee of the Red Cross (ICRC).

The Awards, which were held for the third year, were organized to promote ethical, accurate and responsible reporting on humanitarian issues including violence against healthcare workers, disaster reporting, issues related to people with disabilities, disaster response/preparedness, and other similar issues.

The winners and runners-up in the four categories are as follows:

Winners and runners-up were selected by a panel of senior journalists from a total of 278 entries from across the country. Jury members included Raza Hamdani, Consultant Editor of The Independent in Pakistan; Dr. Seemi Naghmana Tahir, Chairperson Department of Mass Communication, University of Karachi; Mehmal Sarfraz, Co-Founder of The Current; and Kamal Siddiqi, Director CEJ.

In her keynote speech at the event, Former Chairperson Human Rights Commission Zohra Yusuf lauded the Awards, saying “this is a tremendous initiative. This is an area of reporting that is much needed in Pakistan as well as all over the world because increasingly we see more and more conflicts and natural disasters as a result of which there are many humanitarian crises which need to be focused on.”

Addressing the audience, jury member Mr. Hamdani, too, pointed out the lack of focus on humanitarian reporting in the country and appreciated the efforts of CEJ and ICRC saying that “this is a really good initiative and I hope it will continue.”

Jamal Khan, Deputy Head of Delegation ICRC, elaborated on the collaboration with CEJ-IBA, which includes a series of workshops on humanitarian reporting, saying that “this partnership entails a very robust calendar of activity throughout the year.” Commenting on the hard work put in by journalists he said that “ICRC along with CEJ is bearing cognizance of the individual commitments and sacrifices made by journalists to uphold ethics of responsible reporting and come together to hold this annual humanitarian award ceremony to recognize these selfless individual commitments.”

Speaking at the event, Kamal Siddiqi, Director CEJ, said that the “media is fixated on political stories, and in this climate, the challenge is to tell stories that matter.” He appreciated the support of ICRC in encouraging and supporting journalists in this endeavor. News Desk