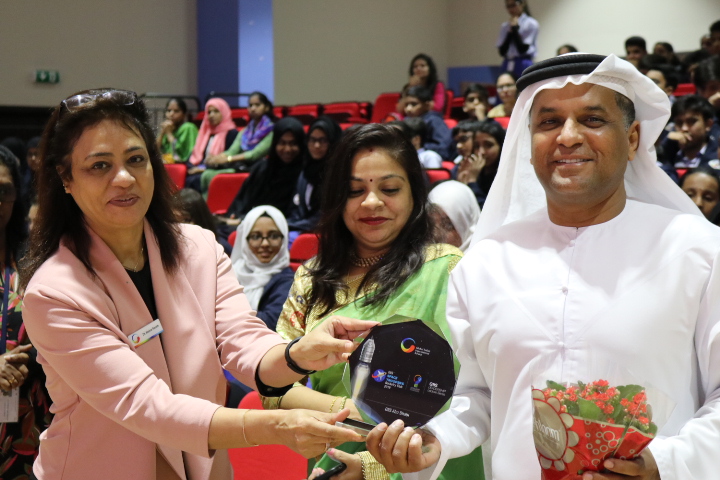 ABU DHABI: As part of their Leadership Lectures series, Global Indian International School, Abu Dhabi announces their Space Troopers Rocketry Club for young budding rocketeers in the country. The club will give students the opportunity to learn the basics of rocket making, explore principles that make them fly and lot more. The Rocketry Club was launched on 8th October 2019 in the school’s AUH campus where Mrs Shrisudha Viswanathan, former ISRO scientist and Dr Khaled Al Hashmi, Senior Director of National Space Science and Technology Centre presided over the event, inspiring the students with tales and facts from the fascinating starry space around them. Knowledge by experience and creativity are both teachings that GIIS considers essential for growing children and this enriching session with such prominent personalities was an opportunity for the kids to learn from the very best.

Implemented under their visionary venture, the Global Centre for Innovation and Entrepreneurship (GCIE), the Space Troopers Rocketry Club is in line with their aim to teach students much more than what is prescribed in the textbooks. Famous for its trademark 9 Gems philosophy which is a combination of ideas both from the Western as well as the Eastern educational approaches, GIIS strongly believes that entrepreneurship, leadership, and advanced learning are essential components of an academic curriculum.

A frontrunner in exposing students to advanced scientific concepts from their early years, GIIS announced a set of two intriguing programs as a part of the club, CHANDRAYAAN 2 and COSMICJAUNT.

The first workshop, CHANDRAYAAN 2 will be held on 22nd December 2019, it will be a power-packed 3-hour workshop that will help students explore their imaginations and fuel their passion for space science. The registrations for this workshop are now open, for both GIIS and Non GIIS Students.

The second workshop titled COSMIC JAUNT, will be a 5-day workshop on the basic principles of rocket-making, that will commence on 15th to 19th December 2019. This workshop will provide young learners an exciting opportunity to learn the basics component that go in to the making and launching of a rocket. That’s not it, students will also be taught how to build and launch their own rocket models! The registrations for this workshop are now open, for both GIIS and Non GIIS Students.

Aimed towards advanced thinking and learning, these workshops are an excellent chance for budding rocketeers to kick start their space education and open doors to the world surrounding our planet Earth. Says in PR