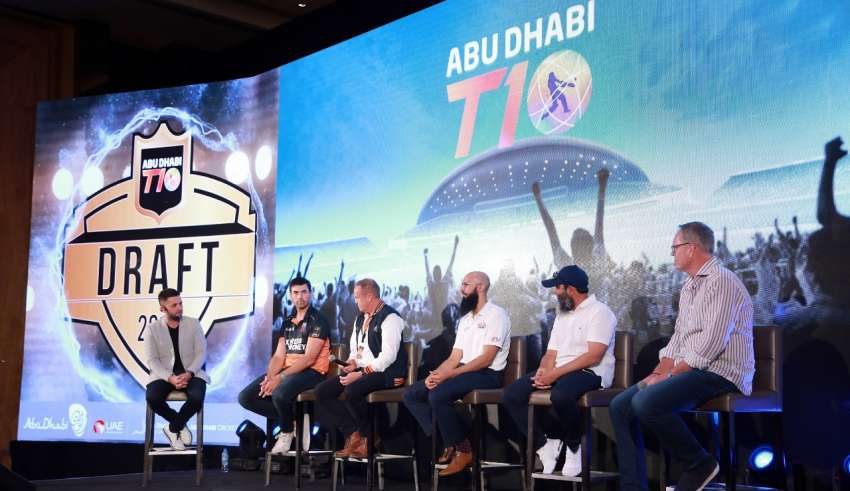 ABU DHABI: The players who are set to light up Zayed Cricket Stadium for the inaugural Abu Dhabi T10 were locked into place at a glittering ceremony last night. The annual player draftin the nation’s capital saw 110 players allocated to eight teams, as well as a host of super stars unveiled for the first time.

The drama-filled event allowed franchises just three minutes to select the players that would make or break their teams’ success in the showpiece 10-day tournament. With big name cricketers up for grabs such as Mohammed Hafeez, Kieron Pollard, Shoaib Malik and Adil Rashid, tension crackled as players were snapped up by the franchises.

Speaking on the side-lines of the draft, CEO of Abu Dhabi Cricket, Matthew Boucher, said: “It has been an electrifying evening filled with a lot of anticipation and excitement. The teams had to make quick and snappy decisions about who they feelcould steer their team to glory next month, and there have been some closely guarded strategies across the course of the night.

“The lists of names have now grown into some formidable team sheets, and with everything now assembled,we can’t wait to experience the drama and passion of T10 cricket with local fans and those around the world.”

Defending champions Northern Warriors opted for a strong West Indies side in the draw, with Darren Sammy already confirmed as the team’s icon player. The famed Andre Russell joined Sammy with three other of his compatriots, bringing the West Indies’ contingent of the team to five. Pakistan’s Wahab Riaz’s expertise was brought on board thanks to his fast-paced bowling, as part of a line-up focused on providing speedy deliveries. The Northern Warriors will begin their title defence against the Maratha Arabians on November 15.

The newest addition to the Abu Dhabi T10 tournament, Team Abu Dhabi, made some well strategizeddecisions during the draft, placing an emphasis on a strong bowling side. With Moeen Ali already selected as the team’s icon player, the team had successful coups with Sri Lankan powerhouse Niroshan Dickwella, Kiwi all-rounder Corey Anderson, and left-handed fast bowler Mohammad Amir. The team will present a stiff bowling line-up for its opponents.

Revealed as the mystery eighth team, Team Abu Dhabi is supported by the Abu Dhabi Sports Council, and will be trained by former England coach, Trevor Bayliss, and coach of the UAE National Cricket Team, Dougie Brown.

The Maratha Arabians chose a balanced team, opting for a mixture of a fast bowling attack and a strong batting line-up. With icon player and right-handed big hitter Chris Lynn at the helm, the team brought in the iconic Lasith Malinga in the first round of draws, ensuring the team would garner a strong following with Sri Lankan fans. West Indies heroes Dwayne Bravo and Chadwick Walton were brought on board, bringing a strong and diverse team to the table.

The West Indies all-rounder, Kieron Pollard, was quickly snapped up by the Deccan Gladiators. With Shane Watson as the icon player, the Gladiators favoured a team that was strongly led by all-rounders, with five eventually making it into the team. With a bowling line-up that mixed experience in the shape of Fawad Ahmed and the UAE’s Zahoor Khan with young talent such as England’s Mason Crane, the Deccan Gladiators adopted a varied line-up, allowing the team flexibility as they build up for the showpiece event.

The Gladiators’ first opponent on November 15 will be the Delhi Bulls, led by world-cup winning captain, Eoin Morgan. The Bulls pulled in former Pakistan captain, Shoaib Malik, to further buoy their strong batting line-up, which also includes Afghanistan’s Mohammad Nabi, Sri Lanka’s Kusal Perera, and Pakistan’s Aamer Yamin. England’s leg-spinning magician, Adil Rashid, was chosen to lead the bowling, which contains a variety of pace and spin. The team chose players from all corners of the globe, including Irishman Paul Sterling, the Dutchman Tobias Visee, and American Ali Khan, presenting a team with a strong mix of both batting power and bowling talent.

Shahid Afridi was joined by his fellow Pakistani teammate, as Team Qalandars opted to bring in “The Professor” with Mohammad Hafeez. Hafeez and Afridi joined a team comprised of 10 Pakistani players, with Imad Wasim and Faheem Ashraf also entering the fray. The team presents a bombastic batting line-up, capable of smashing balls far beyond the boundaries of Zayed Cricket Stadium, and setting high targets for teams to chase. Chris Jordan will bring his skills with the ball to a bowling squad comprised of both spin and speed. Tickets will be scarce when Team Qalandars meet Team Abu Dhabi on the opening night of the Abu Dhabi T10 on November 15.

Similar to Team Qalandars, the Bangla Tigers opted to focus on big hitting as their strategy for a chance to clutch the Abu Dhabi T10 Trophy, bringing in 12 players with impressivebatting skills. Former limited overs captain, Sri Lankan Thisara Perera, serves as the team’s icon player, and will be joined by names such as West Indies’ Andre Fletcher and South Africa’s Colin Ingram. The Tigers’ batsmen will be looking to pounce against the Deccan Gladiators in their first match of the tournament on November 16.

The Karnataka Tuskers took the opposite strategic tactic to the Tigers, opting for a team that places a heavy emphasis on a predominantly speedy bowling line-up. With icon player and big hitter Hashim Amla in attendance at the draw, the Tuskers brought on bowlers such as Nepalese Sandeep Lamichhane, promising English talent Pat Brown, and the slow-left orthodox Emirati player, Ahmed Raza. With batsmen joining Hashim at the crease including Evin Lewis and Johnson Charles, the Tuskers made sure they also had a strong batting powerhouse to provide stability in a format that can twist at each and every turn.

Tickets for the Abu Dhabi T10 start from the special price of AED 10, and will allow spectators to watch up to three matches a day. To book tickets, or to receive hospitality information, please visit: https://www.q-tickets.com/abudhabit10. Sport Desk