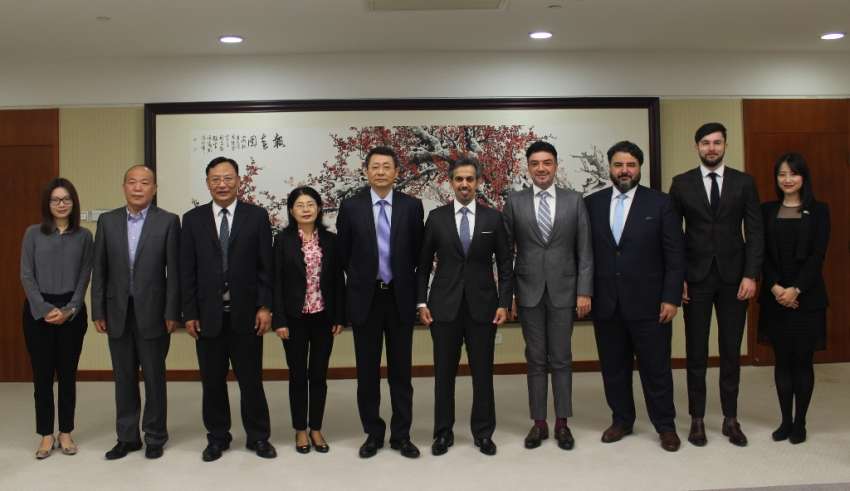 Group photo- HE Buamim and H.E. Wu You at the headquarters of the Shenzhen Municipal Government

DUBAI: Dubai Chamber of Commerce and Industry has announced its expansion in China with the opening of a new location in Shenzhen that will be tasked with exploring business potential in the emerging in the fast-growing technology and innovation hub and attracting innovative Chinese companies to Dubai.

The Chamber’s team in Shenzhen will identify business opportunities in the city’s high-technology, hardware manufacturing, IT, finance, trade, tourism, maritime and logistics sectors, as well as prospects for Dubai Chamber members and UAE companies to benefit from China’s development plans.

During the visit, the Dubai Chamber delegation met with key stakeholders from the public and private sectors in Shenzhen and discussed potential cooperation to introduce Chinese solutions in the Dubai market related to cloud services, digitisation and drone technology.

H.E. Buamim met with H.E. Wu You, Deputy Secretary General Shenzhen Municipal People’s Government, at the headquarters of the Shenzhen Municipal Government in Futian District. H.E. Wu You welcomed closer cooperation with Dubai Chamber in the lead up to Expo 2020 and expressed a desire to build closer cooperation between the business communities of Shenzhen and Dubai. The meeting was also joined by leaders of Shenzhen’s leading business associations, including Shenzhen CCPIT and Shenzhen Federation of Industry and Commerce.

In addition, the delegation visited the offices of several prominent companies based in Shenzhen, including Tencent, an Internet-based technology firm which operates China’s WeChat App; Shenzhen Energy, a state-owned power generation company; and DJI Drones, a leading manufacturer of drone hardware and software.

Commenting on the announcement, H.E. Buamim explained that the Chamber’s presence in Shenzhen complements Dubai Chamber’s network of international offices and efforts to foster Dubai-China cooperation in key areas of mutual interest such as innovation, smart city solutions and advanced technologies

“Since Dubai Chamber opened its first China office in Shanghai in 2016, the number of Chinese member companies has surged by more than 50% to exceed 3,200 today. Through our efforts in Shenzhen, we hope to attract many more innovative Chinese companies to Dubai specialising in cutting-edge technologies that can support the emirate’s vision and transition to a global innovation hub,” he added. China is currently Dubai’s top trading partner and bilateral non-oil trade has increased by 36 percent between 2011 and 2018 to exceed AED 139 billion last year. News Desk