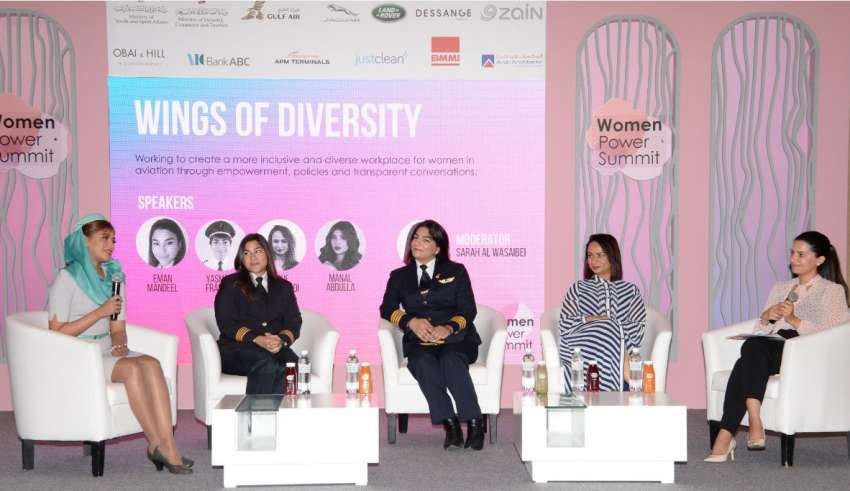 MANAMA: Gulf Air, the national airline of the Kingdom of Bahrain, took part in the Women Power Summit 2019 which was held at the Sofitel Bahrain Zallaq Thalassa Sea & Spa Hotel. As well as being a main sponsor of the two-day summit, Gulf Air was also registered as the Travel Partner of this inspiring and networking event, flying in key speakers from the region to the Kingdom of Bahrain.

Other than sponsorship, Gulf Air’s participation was in the form of a dedicated session that focused on women in aviation and included an interesting conversation by five Bahraini women at Gulf Air: Director Human Resources Mrs. Nouf Al Sowaidi, Captain Yasmeen Fraidoon, Engineer Eman Mandeel, Flight Attendant Eman Abdulla and the session’s moderator was Ms. Sarah Al Wasaibei from Gulf Air’s marketing department. The session touched base on inclusion and gender diversity in the workplace and the importance of finding and creating opportunities as well as mentorship and coaching to aid the younger generation of women to follow their passion and seek non-traditional female careers.

The Women Power Summit 2019 presented powerful female leaders in different fields and industries from the Kingdom of Bahrain and the region. Representatives had the opportunity to interact with the attendees and share their different personal stories and experiences. The focus and theme of this year’s summit was ‘Women in Leadership: Inspiring Action and Leading Change’ and the speakers shared their thoughts and opinions on working together, communicating and building stronger relationships within teams in the workplace environment. Gulf Air alongside other sponsors of the event were also recognised in an appreciation ceremony by the event organisers. BIZ TODAY MONITOR