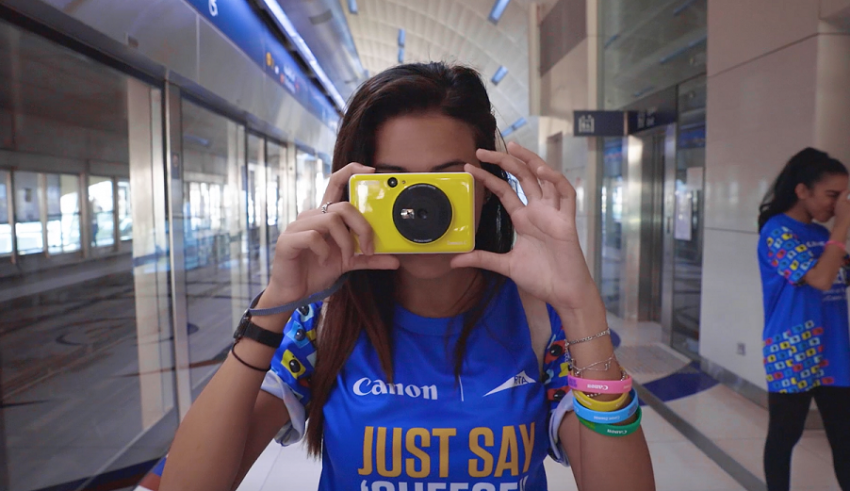 DUBAI: Canon, a provider of imaging technologies and services, has partnered with Roads and Transport Authority (RTA) for the second consecutive year to support its celebrations of the milestone 10 Year Anniversary of the Dubai Metro, which ran for a ten-day period from 9 September 2019. To mark the occasion, Canon ran a series of promoter activations from Dubai Mall to Mall of the Emirates metro stations.

A decade after H.H. Sheikh Mohammed bin Rashid Al Maktoum, Vice President and Prime Minister of the UAE, and Ruler of Dubai first opened the state-of-the-art service to the public The 10-Year Anniversary of the Dubai Metro was kicked off by H.E. Mattar Al Tayer, Director General and Chairman of RTA. Canon was amongst a number of partners of the initiative, alongside supporting brands including Emaar, Pepsi, Nike and Cartoon Network.

Passengers on the metro over the ten-day period had the chance to win through promoters at stations taking pictures of metro passengers. A social media competition was run parallel, where users shared their pictures using the hashtags @CanonME and @RTA_dubai along with #DubaiMetroTurns10. 60 gifts were won at stations – Zoemini instant cameras and photo printers – with an additional forty winners announced at the end of the social media competition on 19th September.

“We are excited to partner with an internationally reputed company, like Canon, in celebrating Dubai Metro 10th anniversary. Canon’s participation has definitely optimized the activities of this occasion and remarkably made the event more spectacular,” said Rowdah Al Mehrizi, Director of Marketing and Corporate Communication, RTA.

“Seizing this opportunity, we would like to thank Canon for their valuable contribution to enhance our celebration to mark a decade after launching this iconic project that changed the way people commute in this vibrating city. This project has upgraded the lives of many in this metropolis that attract visitors, tourists and business travelers from all over the world,” added Al Mehrizi.

Mai Youssef, Corporate Communications and Marketing Services Director, Canon Middle East and Canon Central and North Africa, said: “We are proud to have partnered with RTA once again on this significant milestone as it celebrates 10 years of operations in Dubai in the provision of world-class public transport options for residents and tourists alike. As a business, we are supportive of the RTA in its efforts – as demonstrated by our partnership with them for the second year running – to help reduce the carbon footprint for those who choose public transport, in turn, reducing harmful transportation-related emissions.”

“We would like to take this opportunity to congratulate the RTA in its special achievements over the last decade and we look forward to many more years of collaboration – as an environmentally conscious and responsible company we will remain committed to supporting government initiatives designed to benefit the communities in which we operate. Supporting such initiatives also underlines our commitment to our global, corporate philosophy kyosei, meaning living and working together for the common good”; Mai further added. Last year Canon partnered with Roads and Transport Authority (RTA) to support ‘Public Transport Day 2018’. To mark the celebration, Canon organised several ground activations across the various location at Dubai Metro Stations including Jaflya, Union and Sharaf DG.