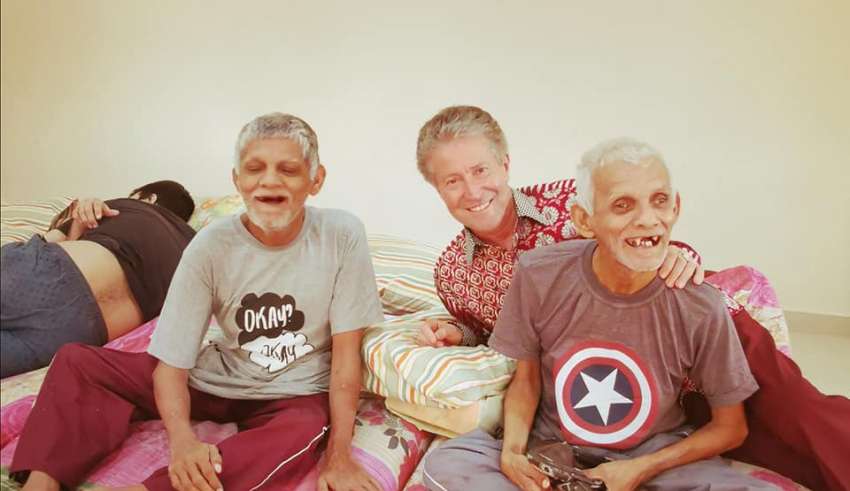 Mr. Emil Wyss, who was the Consul General of Switzerland in Karachi from 2014-16, recently was in the metropolis and Hyderabad on a twelve days private visit.

“Just before leaving Karachi after my diplomatic assignment ended, my wife and I committed to revisit this beautiful country every year around the 14th of August. I’m very happy that I could come this year to celebrate the Pakistani Independence Day with friends and to meet with some local charities, and NGOs to further promote their cause to serve the less privileged” said Mr. Wyss who arrived in Karachi on August 07.

Despite heavy rains over past week-end, the former Swiss diplomat, went out and about on his mission to visit Friends of Burns Centre at the Civil Hospital (now Dr. Ruth K. M. Pfau Hospital), Brenton Carey Hostel for orphan and single-parents girls students, the Edhi Foundation, IBTIDA Drug Rehabilitation Centre, and Dar-ul-Sukun home for the abandoned children with special abilities.

Dressed in a half-starched traditional Pakistani shalwar kameez, with waistcoat, and sandals, Mr. Wyss made sure to attend the official flag hoisting ceremony at the Mazar-e-Quaid on the morning of August 14. Following which, he visited Afzaal Memorial Thalassemia Foundation where he donated blood  for thalassemia major children. Later that day, he visited Markaz-e-Umeed to participate in the Independence Day celebrations and enjoyed BBQ dinner with the elderly at Vcare Social Welfare Society in the metropolis’ North Nazimabad area.

While he was in Hyderabad, the expat met with students of Government Boys Public School from Kotri’s Dhani Bux Village, visited Neuro Medical Centre, attended Eid and Independence Day celebrations organized by the Rotaract Club of Hyderabad Galaxy, and showed keen interest in the artworks made by students during his trip to the Mehran University’s Centre of Excellence in Arts and Design in Jamshoro.

On the second last day of his tour de Karachi, Mr. Wyss visited the offices of HANDS Pakistan, went to meet students at the Anjuman-e-Behbood Samat-eAtfal (ABSA) School and College. He also participated in a special event arranged by Dawood Global Foundation for its Educate-a-Girl program.

In the vicinity of Landhi, he visited Drug Free Pakistan Foundation. Mr. Wyss also made a stop at one of Pakistan’s first ever vocational education institute, Pak-Swiss Training Centre, and spent one afternoon with the especially-able children at the Umeedgah Rehabilitation Welfare Trust.

Few hours before returning back, Mr. Wyss did not miss the Commissioner Karachi’s City Parade. Talking to senior journalists, and media representatives at a local hotel he shared details of the tour, cherished the world-famous Pakistani hospitality, and expressed his interest to revisit Pakistan, soon, with his wife – Arie.