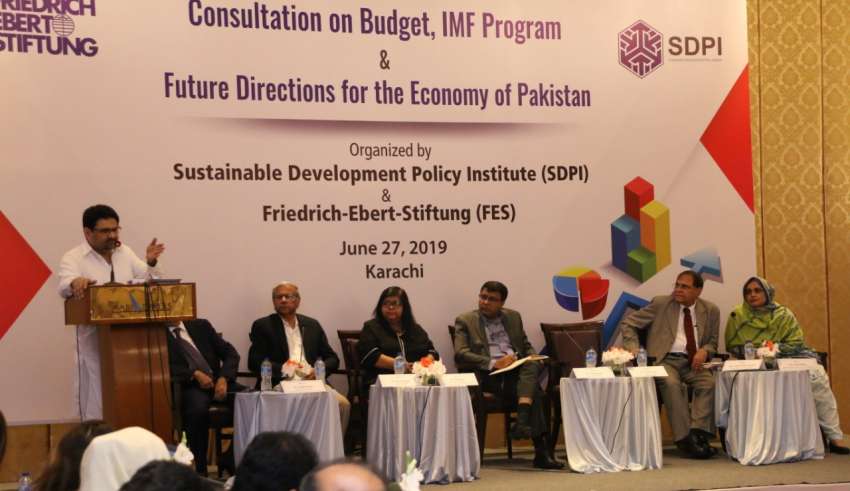 KARACHI: Former Finance Minister, Dr. Miftah Ismail said over the past five decades Pakistan’s exports to the world trade has been shrinked from 2 per cent in 1950 to less than 1 per cent today, largely due to lack of a strong industrial base. He said Pakistan’s economy needs to rebuild towards export-led growth model, which is the only future of the country and economy.

While addressing a Post-budget Meeting and Launch of the Dr. Hafiz A. Pasha’s Book titled “Growth & Inequality in Pakistan” jointly organized by the Sustainable Development Policy Institute (SDPI) and the Friedrich-Ebert-Stiftung (FES), Office Pakistan at Karachi, Dr Miftah said Pakistan needs to increase its industrial base in order to double the exports volume.

While expressing his views on the budget, Dr Miftah said the goal of collecting PKR 5555 bn tax revenue was impossible to achieve in this economy, when the economy, especially on the manufacturing front, was downsized and the government could only be able to collect around PKR 4000 bn with much effort. He said 38 per cent growth in revenue collection was not rational and the government may introduce one or two mini budgets in coming fiscal year. It is also appeared that the government may not complete this IMF program, as drastic measures taken in the budget cannot be achieved, he added. He said due to high policy rate, it is difficult to attract foreign investments.

Dr Miftah said due to devaluation of rupee every day the average minimum wage of a Pakistani has been reduced to 107 USD from 143 USD in Noon League tenure. This has directly impacted the purchasing power of poor and middle class. Moreover, increase in gas, electricity and oil prices has further exacerbated the already poor condition of the marginal segment of the society, he added. While commenting on Financial Action Task Force (FATF) conditions, he said FATF is more a political issue where world powers use this platform to put pressure on Pakistan. He said Pakistan should focus more on controlling the terror financing as compared to money laundering.

Joint Executive Direct, SDPI, Dr Vaqar Ahmed said Budget 2019-20 promises higher revenue collection targets, but increased revenues are not possible without improving tax administration at both federal and provincial level. If tax authorities resort to predatory measures, this will discourage local and foreign investment. He said a long term tax policy is required to promote competitiveness in manufacturing, where focus should be on promoting exports of new sectors including information technology, software and allied services sectors. Dr Vaqar said on the expenditure side of budget, there is a large room to reduce current expenditures by merging or consolidating federal ministries and divisions. This could create additional fiscal space for Ehsaas program. He said to demonstrate strong resolve for structural reforms, the government will need to expedite reforms which could bring down circular debt and reduce losses of public sector enterprises.  Ease of doing business measures are also required to lure foreign direct investment, particularly in special economic zones and export oriented sectors, he added.

Dr. Kaiser Bengali, Senior Economist said the incumbent budget is an attempt to kill the economy with the aim to grab the money from the pockets of the people. He said FBR inspectors will now rob the people like a thief. He said over the last 40 years our economy is completely an import oriented economy and there is need to ban completely the non-essential consumer imports item. We need to aggressively reverse the import orientation of the economy and need to support and expand our manufacturing industry, he added.

Abdul Aleem, Secretary General, Overseas Investors Chamber of Commerce and Industry (OICCI) termed the finance bill 2019-20 a balance budget, as the chamber was expecting more drastic and radical measures given the state of the economy. He said the government should impose taxes on the industries, but the taxation needs to be transparent, consistent and accountable. Overregulation was another major challenge for the international companies and industries to grow where a company/ industry has to comply with around 68 different regulations which vary from province to province, he lamented. The government needs to regain the trust and confidence of the domestic investors in order to attract the international investments, he emphasized.

Mr. Abdul Qadir, Adviser, FES Pakistan said there is so much disappointment in our young generation, as they see no hope or positivity around the future direction of the country and the economy. The challenge for the state is to measure up to the aspiration of the young generation through ensuring the provision of decent jobs and work. He said around 60 per cent of Pakistan population is earning even less the minimum wage, which means more than half of the total population of the country cannot meet even their basic needs amid growing inflation. Moreover, rising inequality is also causing chaos in the society. The government should mindful of these challenges while framing and finalizing their annual budgets and economic schemes, he stressed.

Jehan Ara, President [email protected] said Pakistan Tehreek e Insaf (PTI) used to talked a lot about digital Pakistan and digital transformation, but it is unfortunate to note that there is no allocation for  digital Pakistan program in the federal budget, which shows the priorities of the government. She said IT sector was not recognized by our top political leadership which discourages the sector and especially our young champions of the digital sector. In order to help grow the IT sector, the government must allocate some resources for this sector, GST on IT services should be brought down to zero and capacity needs to be build, she suggested.

Dr. Safia Minhaj of Department of Economics, Karachi University said academia, institutions and policy makers all need to work together to tackle the country’s economic woes. She said Pakistan has now become a consumer oriented economy, as we are not willing to produce rather focusing on outsourcing. There is need to bridge the trust deficit among the local investors and the government must not repeat the mistakes of the past such as nationalization of the industries and freezing of dollars accounts, she stressed. News Desk