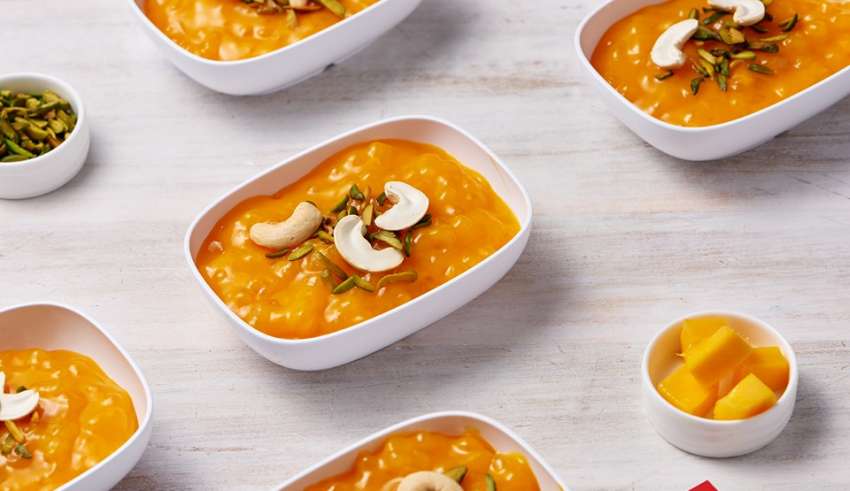 Customers travelling to India in July, will enjoy the seasonal flavours of the Alphonso mango as the airline makes the tropical fruit the star of its desserts in all classes

In the next two months, Emirates will launch a range of seasonal menu items on select routes. The special offering will incorporate flavors from the summer harvest – from strawberries and cream paired in Eton Mess for United Kingdom routes to Alphonso mangos in kheer and layered cakes for flights to India.

In July, First and Business Class customers travelling to the UK and Ireland can sample treats featuring seasonal strawberries including the classic British summer dessert Eton Mess. Strawberry eclairs, a strawberry cream delice and a deconstructed mille-feuille with poached strawberries, white chocolate cream, pastry crisps and basil tuille will also be served. Emirates’ selection of desserts for its UK and Ireland routes in July alone will require more than 200 kilograms of fresh strawberries.

Customers travelling to India in July, will enjoy the seasonal flavours of the Alphonso mango as the airline makes the tropical fruit the star of its desserts in all classes. First and Business Class customers will be treated to an Alphonso Mango layer cake while Economy Class customers will enjoy an Alfonso mango and sago kheer. The special month-long menu will see almost 6 tonnes of Alphonso Mangos and mango puree sourced from India.

Emirates’ First and Business Class passengers travelling to and from Italy in August can look forward to an appetizer of the season’s heirloom tomatoespaired with burrata, an Italian cheese made from mozzarella and cream. Burrata, whose name translates to “buttered,” has a solid outer layer of curd made from fresh mozzarella, which is then formed into a hollow pouch and filled with soft, stringy curd and fresh cream. The cheese served onboard is made fresh daily and locally in Italy and the UAE by artisanal cheese makers using traditional methods. The burrata is paired perfectly with the sweet and tangy flavours of the heirloom tomatoes that have ripened in the summer.

Emirates delights customers with special menus year-long for global events like Chinese New Year, Ramadan and Easter and according to the availability of seasonal ingredients. In the last month, the airline also introduced meals around delicacies like white asparagus on flights to Germany, Amsterdam and France, aligning with the European harvest season. Hanami-inspired menus were introduced on flights to Japan during the cherry blossom season in April.

The airline prides itself on its longstanding global partnerships with fresh local providers and artisans. This emphasis on high quality ingredients stems from Emirates’ focus on simple, well-cooked dishes that highlight their destinations’ regional cuisine. Its round-the-clock kitchen provides meals for 520 flights a day, serving 209 meals a minute – a feat accomplished by Emirates’ 1,800 chefs and their arsenal of 12,450 recipes.

Food enthusiasts can go behind-the-scenes of Emirates’ on board menus and global partnerships with the Emirates Food Channel available on ice, the airline’s award-winning in-flight entertainment system. News Desk