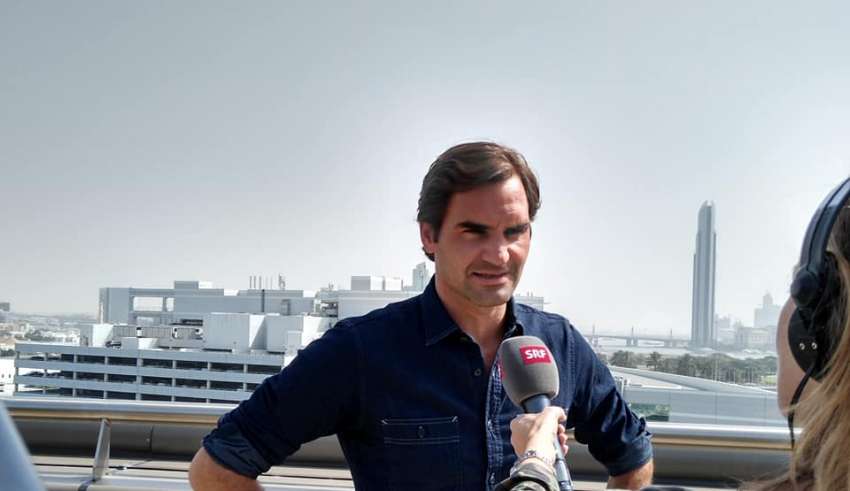 DUBAI: Roger Federer will be bidding to set yet another milestone in his incredible career when he competes this week at the Dubai Duty Free Tennis Championships.

The seven-time winner will reach 100 career singles titles if he can walk away with the title. It has been an event waiting to happen since he won Basel towards the end of last season, and although it is something he looks forward to achieving he is not desperate to reach the target. When it happens, it happens.

“I think that’s got to be the mindset, that you try your best every match, every week anyway,” he said. “Things fall into place or they don’t. It’s not because of lack of effort. Of course, coming to Dubai where I’ve enjoyed a lot of success sort of makes you believe maybe it could happen here. Then again, draw is tough. Haven’t played in a few weeks so you reset everything, get ready for your first round, hope everything is going to click again here in Dubai.

“It gives me confidence that I know I can play well here in Dubai on this court in these conditions, even though I must say the conditions play much, much slower than the previous years here. This is a big shift, I believe, in the tournament. If they’re going to keep this surface this slow, or the balls that slow.

“In the past, Dubai always used to be a tournament where you played, you got out of it at the end, you’re like, ‘I’m not sure I’m playing actually that good’ because things are fast, points get decided on one, two shots here, there. It’s reaction. I think you can really grind a player down now. It’s been actually quite a big change. I’m excited to be here. I do believe this surface also lends itself very well for me to play well here.”

He plays a veteran like himself, Philipp Kohlschreiber, in the first round on Monday, and by chance they practised together a couple of days ago.

“We played two sets basically. We really both know what we’re getting into. He looks good, so it’s going to be tough,” said Federer.

Although he is expected to win his opening round Federer is taking nothing for granted. The fact that on his last visit two years ago he was beaten by an opponent ranked 116 in the world, Evgeny Donskoy, in the second round has surely not been forgotten.

“I think the depth in the men’s game is really, really big,” said Federer. “I think I have to respect basically first-round opponents forever. Just because you’re ranked world No. 1 does not give you a free pass into the second round. Maybe it was like this back in the ’50s, I have no idea. Nowadays it’s definitely not like that.

“Everybody can play tennis. We can feel in practice every single day; the moment you’re not 100% — margins are so slim — you could easily lose. I think that’s why it always keeps us very humble and on the ground. That’s why this first round is a true test. I think when you come through it, it also fuels you with a lot of confidence. Yeah, I’m looking forward to it.”

Federer will be playing his first match since his stunning defeat by Stefanos Tsitsipas at the Australian Open. Following that match he took some time away and now feels fresh and ready for the challenges ahead.

“It’s actually been a nice break away from it all,” he said. “I went on vacation after the Australian Open with the family. After that, I went to practice. Important was not to get hurt because I was training in Switzerland. It was cold. We had snow and everything. I’m happy I got through that one well. Actually I’m feeling good now. Fitness has been going well, tennis has been going well. I’ve been here a few days. I feel really well prepared.”

But he says he will not really know how he feels until he steps into a match again. Will he be nervous after his break?

“I don’t know,” he admitted. “I think I can answer the question after the first round. I might feel nervous walking out, then super calm during the game. I might be super calm walking out, but then getting nervous at the 15-All point all of a sudden for no reason. Or I get nervous for breakpoints. It could be really anything. It’s really hard to explain.

The Dubai Duty Free Tennis Championships, which continues through 2nd March, is owned and organised by Dubai Duty Free and held under the patronage of H. H. Sheikh Mohammed bin Rashid Al Maktoum, Vice-President and Prime Minister of the UAE and Ruler of Dubai. Sport Desk