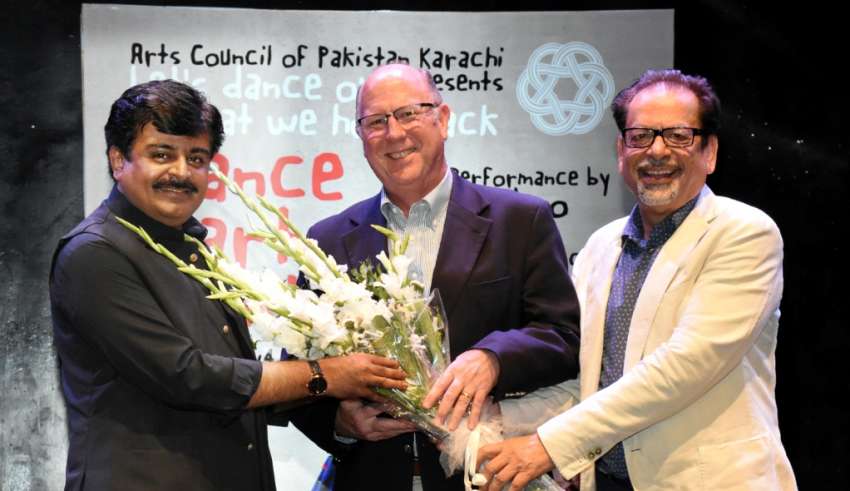 KARACHI: A magical dance performance held in Arts Council of Pakistan yesterday where the most renowned national and international artists such as Gillian Rhodes, Suhaee Abro and Wahab Shah mesmerized the audience with their soulful performance. U.S Consul General in Karachi John Warner and Provisional Minister of culture and Heritage Sardar Ali Shah were the special guests for the occasion where the president of Arts Council Muhammad Ahmed Shah was also present at the spot. In his opening speech, President of Arts Council of Pakistan Muhammad Ahmed Shah said that we are trying to break the “Taboos” of society and today, dance is considered as taboo in our society. He said that Art is the first line of defense against extremism. Talking further about art, he said that art and culture are the identities of a society and no society can survive if they neglect their cultural heritage.

Mr. John Warner said that art can do amazing things bringing the people together. It helps to bring nations close to each other. He further said that art is a universal language and dance is the soul of art. He further shared his experiences saying that he has been to many artistic events across the city and he found all those events marvelous. Later he thanked everyone and said he’s grateful to be here on this momentous occasion.

Provisional Minister of culture and heritage Sardar Ali Shah in his speech said that we believe in art and we believe in culture. He further said that we are trying to promote a free society where art can flourish and everyone can sing and dance on their will.

The dance performance was divided in four parts where in first segment, 46 participants from suhaee’s workshop performed and showed a beautiful group performance to the audience.

In second part, one of the most renown Pakistani artist Wahab Shah performed a sufi dance on “Man Kunt-o-Maula” and highly admired by the viewers. His performance was so mesmerizing that audience demanded to see his another performance which was happily delivered by him.

In third segment, master of classical dance Suhaee Abro performed a slow motion dance which was quite remarkable to watch.

Holding a 20 year experience in the art of dance and seven year experience as a choreographer, internationally recognized American artists Gillian Rhodes also performed her soulful performance on a mime which was quite different art for the audience and got highly admired due to its unique style.  Gillian Rhodes was warmly welcomed by the audience and largely admired the contributions of arts council of Pakistan Karachi for the initiative of promoting performing arts in our country. During the session, certificates were also distributed among the participants of dance workshop which was held previous day. News Desk