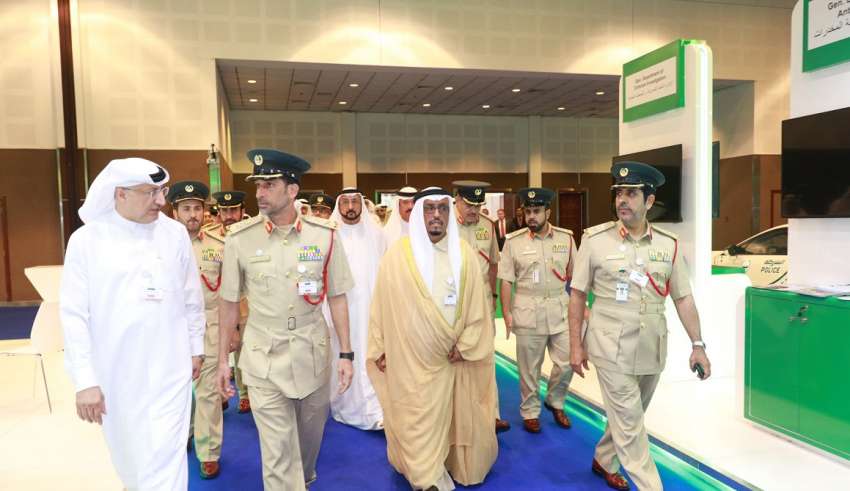 DUBAI: Under the patronage of His Highness Sheikh Hamdan bin Mohammed bin Rashid Al Maktoum, Crown Prince of Dubai and Chairman of Dubai Executive Council, His Excellency Lieutenant General Dhahi Khalfan Tamim, Deputy Chief of Police and Public Security in Dubai and Honorary Chairman of Emirates Forensic, today officially inaugurated the Emirates International Forensic Conference and Exhibition – Emirates Forensic 2018, being held from the 9th to the 11th of April, at the Dubai International Convention and Exhibition Centre, under the theme “Science Serving Justice”.

His Excellency Lieutenant General Dhahi Khalfan Tamim stressed in his opening speech on the approach taken by the Dubai Police and its keenness to train its officers and equip them with knowledge in all fields involved in the security and police work, to be able to deal in high efficiency with crimes of all kinds.

He added: “The conference today is an opportunity to acquire knowledge in the field of forensic science and criminology, calling to focus on the best disciplines and cope with the requirements of the era, which will make us at the forefront in this field”.

His Excellency Lieutenant General Dhahi Khalfan shared with the audience the Dubai Police’s pioneering experience in the field of Forensic Science and Criminology, and the most important achievements made by Dubai Police in this field until the day by setting Dubai Police Forensic Science building that contains the latest technology and equipment, after studying the most important laboratories in the world, such as the United States of America and Germany.

Furthermore, Lt. Gen. Dhahi Khalfan Tamim noted that his inclination to establish a forensics laboratory was one of the main objectives on his agenda since he joined the Dubai Police, saying: “Despite the difficulties and obstacles that prevented the goal from being realized at the time, I insisted on achieving it at the first opportunity I had after I held the post of the Commander-in-Chief of Dubai Police in 1980. The forensic laboratory was completed in November of 1981. The lab was officially inaugurated by His Highness Sheikh Mohammed bin Rashid Al Maktoum, Vice President and Prime Minister of the UAE and Ruler of Dubai, in January 1983.”

His Excellency continued, “Then in 1994, we introduced the ‘DNA Scan’ technique in the Dubai Police Forensic Lab, after we participated in international conferences on DNA, and after it was recognized by the UK and a number of US states at the time as concrete evidence in proving crimes against their perpetrators. We have faced the problem of recognizing DNA as evidence in courts in the UAE. One day, A Sharia Court in Ras Al Khaimah asked us to prove the filiation of a child. The necessary tests were carried out on the sample. The Sharia Court Judge summoned the DNA expert to the Court to take his testimony and discuss the report with him. The Judge recognized the DNA as evidence of the child’s filiation. Accordingly, Sharia laws were able to approve evidence that civil courts governing by civil law had not been approving before. This is evidence that Islamic Law and its Sharia texts are more capable of absorbing developments and innovations. In the same year, we hosted the first conference of its kind in the Middle East about DNA, attended by experts, specialists and judges from various countries around the world, through which we have succeeded in introducing the importance of DNA as a new technique to prove crimes to the state’s judicial authorities.”

He further added, “Previously, we have sent a number of police officers on scholarships to study DNA science abroad. Everything was going on well and we have introduced DNA officially to the forensic lab. Our courts then have started to recognize DNA as a convincing evidence to prove and convict perpetrators. On 29/02/2008, we started to prepare and study a new forensic lab, where it is a modern forensic lab. After the completion of all procedures, the project was initiated and completed. It was inaugurated in March, 2016. The lab is the largest of its kind in the Middle East in terms of capabilities and specialties. It is also considered a basic reference for forensic science and criminology in the region, equipped with the latest technologies, human resources and national as well as international expertise recognized for its efficiency and ability to fully professionally handle advanced techniques in the field of forensics and crime detection. The number of national personnel working in it – doctors, experts, officers, staff – are 631 staff, 19 of them are PhDs, 41 MAs, 143 were BAs and 19 undergraduates, mostly nationals.

From his side, Dr. Abdul Salam Al Madani, Executive Chairman of Emirates International Forensic Science Conference and Exhibition and Chairman of INDEX Holding, said, “Being held in its 2nd edition under the theme “Science serving Justice”, Emirates Forensic Conference & Exhibition has come at the right opportune time, supporting the UAE’s vision of the 2021 of becoming the country with the lowest violent crime rates in the world and the most safe and secure through its mission of applying justice through efficient team work to ensure security and safety of people and property.

He went on saying: “We are very proud as a national company for events management to be part of this international scientific event that brings together experts from the UAE and abroad under one roof in order to exchange knowledge and experiences to combat various crimes.”

During his opening remarks, Ronald Singer, Technical & Administrative Director, Tarrant County (TEXAS) Medical Examiners Office Fort Worth, Texas, said, “Emirates Forensic conference offers us ‘forensic professionals’ a great opportunity to discuss the issue of regulation in forensic sciences. Ensuring the quality of work that is produced by forensic laboratories is a primary concern throughout the globe. This conference provides an important venue to examine this topic, bringing together experts from the world over to discuss many topics of common interest including current forensic research, advances in legal medicine and the administration of criminal justice.”

He added, “Emirates Forensic allows us to share the latest information about the various advances in forensic technology and interpretation while also giving us an opportunity to openly discuss common problems that exist within the field, which is vital to the continued growth of forensic sciences. It is extremely important that the judicial system is given full access to the maximum amount of reliable information, which ensures that justice is rightly served and instances of potential miscarriage of justice are avoided.”

On his part, Professor Jose R. Almirall, Director at the Center for Advanced Research in Forensic Science in Miami, USA said, “At Emirates Forensic, I am giving two presentations and one workshop. The first presentation, “Predicting the Origin of Heroin by Analysis of Inorganic Elements and Isotope Ratios of Strontium,” describes recent research on the use of trace elements and strontium isotope ratios to geographically source the origin of heroin. The second presentation describes the paths to international standardization of forensic science practice using the analysis of trace evidence (glass examinations) as a model for how basic research can result into routine practice in a forensic laboratory. In addition, my workshop will introduce students to the Organization of Scientific Area Committees (OSAC) of Forensic Science and focus on the more than 60 documentary standards within the forensic chemistry discipline under development in OSAC.”

Furthermore, a number of Oral Presentations include: The Role of Dubai Police Stations Directors to Fight Crime by Brigadier Ahmed Thani Al Mehairi, The Implications of Using 3D Printing Technology on Forensic Evidence by Dr. Hamad Al Awar and Dr. Mohammed Al Qassim, Predicting the Origin of Heroin by Analysis of Inorganic Elements and Isotope Ratios of Strontium by Dr. Jose Al Mirall, A Pre-Post Experimental Study On The Life of Blood Stains On Different Soil Samples by Ms. Eleena Philip, Comparison of Drip And Contact Transfer Bloodstains On Fabrics by Ms. SwathiMurali, An Autopsy Study On Pattern Of Injuries In Homicidal Deaths Due To Weapon – A Profile by Dr. Sajeev Slater, Validity Of Presence Of Fluid In Sphenoid And Maxillary Sinuses In Deaths Due To Drowning by Dr. Manu Johns, Fatal Stress Due To Flames by Dr. Parthasarthy K S, Are We Confident Enough with our Forensic Result Reports?’ by Dr. Nadia Al Kandary, Chairperson of Pathology Lab, Ministry of Interior, Kuwait, Using an Application Programming Interface ( API ) to Enable Inter-System Data Sharing of Forensic and Management Data, by David Epstein, Factors Influencing Digital Forensic Investigations by Dr. Ibtesam Mohammed Al Awadi, Preventing Malware Self-Protecting Technology In Banking by Dr. Saeed Almarri and Automated Face Ageing In Search for Missing Children and Adults by Prof. Dr. Hassan Ugail.

This year, Emirates Forensic is set to attract more than 2000 visitors and participants over the next few days while also featuring the participation of 46 local and international experts, 7 workshops, 20 exhibitors and more than 30 scientific lectures and 70 summaries. In addition, the conference is playing host to select chairs of world organizations of forensic science and criminology in the US, UK, France, Germany, Australia, Austria and other countries of the world, as well as scientists from the GCC countries and experts from the UAE in the criminal field.

Furthermore, in an effort to cater to the needs of students aspiring to enter the field of forensics, Emirates Forensic 2018 will provide university students a great opportunity to present their research papers through oral and poster presentations and will also be given a chance to participate in the Young Scientist Award Competition. The awards will be given in various categories including Best Scientific Paper, Best Scientific Poster and Best Research. It is worth mentioning that the conference will also play host to electronic scientific posters on smart screens for the first time this year.

The second edition of Emirates International Forensic Conference & Exhibition, running until 11th of April, is organized by INDEX Conferences & Exhibitions – a member of INDEX Holding in partnership with the Dubai Police. News Desk