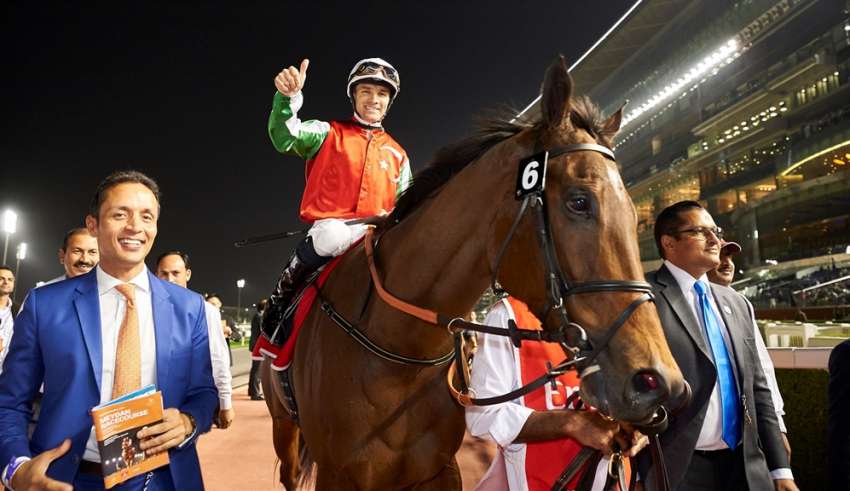 DUBAI: The final fixture of the 2018 Dubai World Cup Carnival, Super Saturday lived up to its billing with both Group 1 features producing memorable winning efforts. Introduced in 2003 as a dress rehearsal for the Dubai World Cup card three weeks later, all seven races are mirror images of a race to be contested on that ultra-valuable occasion when $30 million will be distributed in prize money.

Three horses have won the Group 1 US$400,000 Al Maktoum Challenge R3 sponsored by Emirates Airline, over 2000m on dirt before following up in the $10 million Dubai World Cup and North America will try and emulate them after a smooth success, making all under Richard Mullen, riding for Ramzan Kadyrov and Satish Seemar.

Drawn six in a field of 12, Mullen’s mount was well away and ridden positively to get to the lead. Two-time Group 1 winner Thunder Snow, last year’s UAE 2000 Guineas (G3) and UAE Derby (G2) winner, was among those tracking him throughout and challenged as the two turned for home, ultimately failing to close in on his rival. In the end, North America was a 5¼ lengths, turning the tables on his aforementioned rival. Multiple G1-winning mare Furia Cruzada finished a game third, 3¾ lengths farther back.

“Last time, when second to Thunder Snow (in Round 2), was probably a career-best and he has built on that again tonight. I just wanted to get him into a rhythm; not necessarily to lead, but we broke so well, I was able to get to the front and he was then always happy. I am just very lucky to be part of a big team with Satish at Zabeel Stables. Everyone works so hard and it is great on occasions like this for everyone. Obviously the Dubai World Cup is going to be a stronger race, but he deserves his chance.”

The main turf race, the 1800m Group 1 $300,000 Jebel Hatta sponsored by Emirates Airline, was a great spectacle with the lead seeming to change hands at least six times in the final 400m. The telling challenge, though, came from Godolphin’s Blair House, who pounced inside the final 150m under James Doyle, riding for Charlie Appleby.

Saeed bin Suroor-trained Benbatl was a close second, with Mike de Kock-conditioned Janoobi representing South African a head astern in third. Runner-up on his first two Carnival outings this year, Blair House had landed a handicap over this course and distance three weeks ago. The Group 1 $6 million Dubai Turf is the equivalent race on the big day.

Appleby, who won the 2016 Jebel Hatta with Tryster, said: “We knew this horse arrived here in good form and it looked a wide open race, as it transpired to be. I am sure we will have to come back with him in three weeks in what will be a stronger race but he owes us nothing now.”

Doyle added: “We won a bit too easily last time, so we had to step him up in class as there was no handicap opportunity for him. It has actually worked out very well in the end, because he is a Group 1 winner now!”

Restricted to 3-year-olds and over 1900m on dirt, the middle leg of the UAE Triple Crown, the Listed $250,000 Al Bastakiya sponsored by Emirates.com, was the first race on the card and turned into a procession by Yulong Warrior. Trained by Seemar and drawn the rail, he was soon in front under Mullen with a host of his 12 rivals trying to secure a prominent position behind him. Most of the field were in trouble on the home turn and once Mullen kicked for home, early in the straight, they had the race in safe keeping.

“He is a horse we have always really liked and thought would continue improving as he matures,” Mullen said. “He won his maiden well last time, over 1600m but, obviously, this was a stronger race and he has coped with the increase in both class and distance. He has surprised me just how much he had improved from last time but the nice, low, draw has helped him in both his wins. There should still be more to come from him but the UAE Derby will be a stronger race again. Fingers crossed we can get a nice draw in that as well.”

The Group 3 $200,000 Mahab Al Shimaal sponsored by Emirates Skywards, over the same 1200m dirt course and distance as the Group 1 $2 million Dubai Golden Shaheen, was won in 2016 by Muarrab and 2015 by Reynaldothewizard, who both followed up three weeks later. In 2012, Krypton Factor completed the same double for Fawzi Nass, who looks to have serious claims of repeating the trick with Jordan Sport who made an impressive dirt debut under Adrie de Vries.

Like a bullet from the stalls, they were able to get across to the rail, tracked by Yalta, who tried to challenge for the lead at halfway. However, De Vries was just allowing his mount a breather and set sail for home leaving the home turn. They were never going to be caught with Yalta running on gamely to hold on for second. In behind, Krypton Factor was denied third, in the dying strides, by Wild Dude. The winner lowered the track record in the process to 1:10.18.

De Vries said: “Fawzi asked me to work him on the dirt on Monday to see how he handled it and he loved, so it so we came to this race, not the turf option. We had a good draw and he was very quickly out of the gates, so I was able to get across to that rail. Once I gave him a breather on the turn and committed him for home, he put the race to bed in a few strides. Hopefully we can get a good draw on the big night, because it really does help. That was impressive today and we can enjoy this win then worry about the race in three weeks.”

A 1200m turf track record was then established by Godolphin’s Jungle Cat, winning the Nad Al Sheba Turf Sprint sponsored by Arabian Adventures, a conditions event, just as he had done 12 months ago. Confidently ridden by William Buick for Charlie Appleby, the pair cruised into contention at halfway, led 300m out and powered home. It was a second 2018 Meydan victory for the horse from as many starts, having won the 1400m Group 2 Al Fahidi Fort at the beginning of February.

“He has won that really well, but we knew he was in good form,” Buick said. “The form of his Al Fahidi Fort victory over 1400m was advertised by the win over Janoobi and he has loved this fast gallop to aim at this evening. I was soon in a good rhythm and knew he would be staying on strongly. In the end, he has won pretty comfortably. The soft ground did not suit him in the Al Quoz Sprint last year, so hopefully we get quick ground this time, because I think he is better than ever.”

There was a dramatic conclusion to the Group 3 Burj Nahaar sponsored by Emirates Holidays, over 1600m on dirt, with last year’s winner, Heavy Metal, headed close home and being passed late to finish fourth. That appeared most unlikely when, 550m from home, he was sent to the front by Mickael Barzalona, sweeping past Doug Watson-trained Kimbear, who had led from early on under Pat Dobbs. Heavy Metal went a length clear, but Dobbs and sporting the colours of Sheikh Rashid bin Humaid Al Nuaimi, managed to get a last effort from his horse, leading again close home. Secret Ambition stayed on for second, just in front of Musawaat, who caught the weakening Heavy Metal for third.

“I thought I was in trouble for a moment, but I could see Heavy Metal was getting tired and my fellow has run on gamely,” Dobbs said. “We went very quick early on, so credit to my horse for responding again in the straight when I asked him.”

The nightcap was the Group 2 $250,000 Dubai City Of Gold sponsored by Emirates Skycargo, a prep for the Group 1 $6 million Dubai Sheema Classic over 2410m on turf. The race turned into a battle in the final 300m between stablemates Frontiersman and his well-fancied Group 1-winning stablemate Hawkbill, with the latter lowering the course record to 2:26.85 under William Buick.

“They fought it out well and it was a good race,” Buick said. “I had quite a tough trip and the horse did really well, having to cover a bit of ground. It was a really good performance and he’s an exciting horse, who seems to get better with age.” Sports Desk