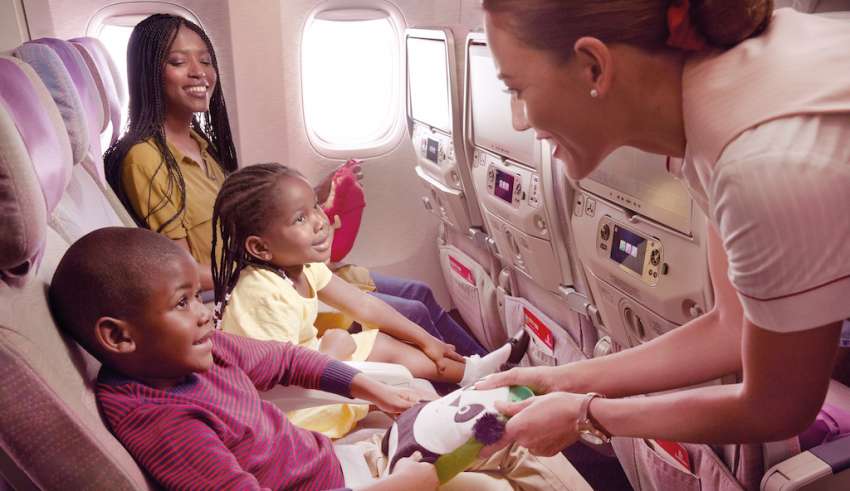 LONDON: Young flyers will take just 49 minutes and 47 seconds to ask the dreaded, ‘’are we nearly there yet?’’ so with parents battling the boredom threshold, Emirates has teamed up with Dr Sandi Mann, a psychologist and boredom specialist at the University of Central Lancashire to find a solution. Dr Mann has worked with the airline to create the Child Boredom Quotient (CBQ), helping parents identify the exact moment their kids will get bored so they can enjoy stress-free travel.

The study of more than 2,000 UK parents of under 12s alongside observations of children during their playtime helped Dr Sandi Mann categorise activities into Active (A), Passive (P), Interactive (I), Creative (C) or Sensory (S) to formulate the CBQ, and ultimately help parents mix the perfect blend of activities to catch boredom before it sets in.

The findings which also saw two thirds of parents (64%) worry about entertaining their children and 43% expressing concern about their children disturbing other passengers, found little travellers aged 3 – 4 to be the most volatile. Bribery techniques such as giving out snacks (41%) in exchange for good behaviour were often used just to keep the peace. Other tried and tested methods of distraction for parents include employing electronic devices (33%) even if they’re not allowed at home, handing out new toys (27%) to keep their tots happy or trying to tire out their children by running around the airport before boarding (16%).

Dr Sandi Mann, psychologist and boredom specialist, University of Central Lancashire comments: “Parents of children aged 3-4 will start to find that this is when their children are physically very active, gaining independence and when they need more sophisticated things to entertain them than they did when they were younger.

For instance, the ‘electronic babysitter’ whilst popular for a flight may not work for all age groups and parents of younger children will find that they have less attention span for this than older ones. Breaking up this passive activity for active or creative ones will stop children becoming bored, restless and disruptive.’’

However, it’s not just bribery that parents resort to when travelling with their children on a plane. An honest 7% revealed that they simply try to relax with an eye mask to block out the disturbance.

Meanwhile, creative pursuits such as drawing was the most popular until age 9 when quizzes and puzzles become more engaging. Colouring and sticker books have most appeal to the younger ages.

Dr Sandi Mann further comments: ‘’Very young children don’t need very sophisticated toys for a plane journey and will be most amused by things in the environment – including people and of course their parents. For example, this could be ‘I Spy’ whilst, regular walks up the aisle are good for toddlers for exercise and for pre-toddles to change the visual environment. Don’t forget singing and interactive games like peekaboo are also great.

Older children can be given simple materials like notebooks and pens, puzzle books and comics. Ensure that they take breaks every so often to walk up and down the plane and try to restrict the passive viewing just like you might at home. Don’t be afraid of them being bored as left to their own devices with a few basic materials, they will find creative ways to engage their brains.’’

Jade Cobbs, Emirates Cabin Supervisor, comments: “We understand that parents often dread the idea of travelling on a long-haul flight with bored children.

However, parents need not wait until the boredom alarm sets off. Whether it’s utilising the Cabin Crew to provide your kids with activity packs to watching the family friendly TV shows and movies on Emirates’ ice entertainment system, families can avoid the boredom threshold via some pre-prepared activities, interactive games or inflight entertainment.’’

Dr Sandi Mann has created a suggested guide for how to structure a plane journey for each age range. The activities are categorised as Active (A), Passive (P), Interactive (I), Creative (C) or Sensory (S) and the idea is that by mixing these up and stopping an activity at the right time, boredom and restlessness will be minimised.

Active – walking up and down the aisle, playing with a pack of cards

The CBQ tables are attached as well as a guide to Emirates’ top tips for travelling with children. News Desk