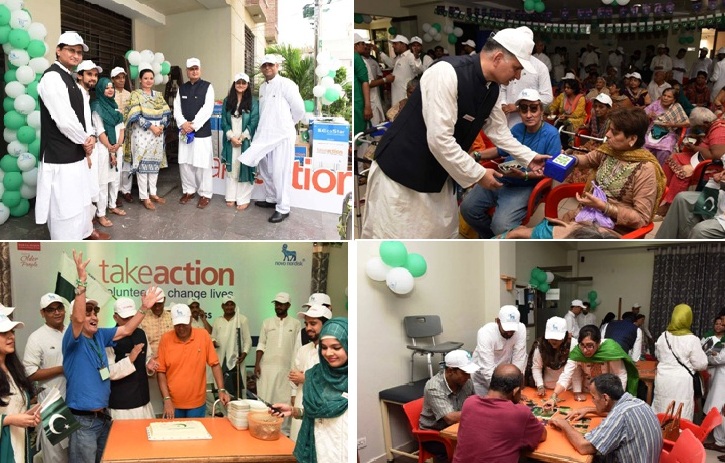 KARACHI: The smiles on their lips were priceless. The shine they had in their eyes were soothing for the hearts. Finally they had a company with them. Someone to lend an ear to their stories. Someone to hold their hands and restore their faith in humanity. Someone to put an a halt to their isolation, even if it was for a day. Their faces lit up with excitement as the employees of Novo Nordisk Pharma Pakistan (NNPK) welcomed them to the dining hall that was decorated to celebrate 70th Independence Day of Pakistan with them. As a part of their corporate social responsibility global program named ”takeaction”, Novo Nordisk Pakistan, a leader in diabetes care,  chose to share the joy and happiness of freedom with the elderly citizens residing at Dar Ul Sukun (DUS), Karachi.

It was indeed a rare sight. At one point in their lives, these senior citizens must have been young and living the best they could. Never in their wildest dreams, they would’ve thought to spend the end of their lives in the hands of volunteers. Too caught up in our own lives, we often tend to forget our responsibility towards such needy people who could really use our love, care and time. And that’s the realization which enticed the employees of Novo Nordisk Pakistan to volunteer for celebrating Independence Day with the senior citizens along with donating items of need.

The day kicked off with our National Anthem being sung in unison of NN employees and inmates of DUS after which everyone resorted to respective halls for activities like singing, painting, dancing, drawing etc. Simultaneously, using their expertise in the field of diabetes, Novo Nordisk Pakistan also delivered a brief diabetes management session for the volunteer staff of DUS to better make them understand about the challenges and needs of people with diabetes.

As spontaneous as it could’ve been, the inmates were happy as if their own family had come. Towards the end of the day, there was a cake cutting ceremony and gifts distribution. The General Manager of Novo Nordisk Pakistan, Rashed Rafique Butt expressed his views by saying  ”As an organization, every now and then, we need to resort to such activities with our employees that keeps us reminding of our responsibilities as an individual as well as a corporate. This is what makes us human”

With hopes that such activities continue, the management of Dar ul Sukun along with the inmates thanked Novo Nordisk Pakistan and are optimistic that the activity will become an inspiration for other corporates to follow. News Desk